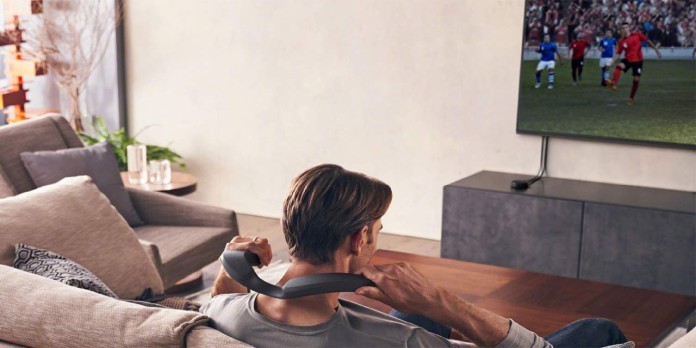 Sony has introduced the SRS-NS7, a new wearable speaker, in its lineup. The WLA-NS7 wireless transmitter is required to use the device, which is a wireless neckband speaker. The wearable speaker is designed to provide an immersive home theatre experience, giving sports, TV, and movie fans a new way to hear the sound that matches the action on screen.

The personalizer app can take a photo of the user’s ear and analyze hearing characteristics by estimating the 3D shape of the ear, resulting in a perfect listening environment for the virtual Dolby Atmos speakers surrounding the user. Users can also listen to 360 Reality Audio music on their smartphones, which simulates being in front of the artist. Of course, compatible music services, such as Deezer, nugs.net, and TIDAL, are required for this feature to work.

The device has an X-Balanced Speaker Unit, which has optimally sized speakers packed into a compact body to increase sound pressure and reduce distortion, resulting in crisp and clear music and vocals. In addition, a built-in upward-facing speaker on the SRS-NS7 delivers sound directly to the user without disturbing others.

The design allows movie fans to listen to music or watch their favourite film late at night without disturbing others in the house, but without wearing headphones that completely block out the environment. In addition, the low-frequency response is improved by an integrated passive radiator, which delivers bass for music and movies.

Also See:  How to: Fix the Camtasia 9 Black Screen Errors in Windows 10

The wireless device has a battery life of up to 12 hours and a maximum volume of five hours. It also includes built-in hands-free calling and can be paired with two devices at once. Furthermore, an IPX4 rating indicates that the device can withstand splashes. Preorders for the SRS-NS7 with the WLA-NS7 wireless transmitter are now available for $299.99. The wireless transmitter alone costs $59.99 and works with some Sony headphones.