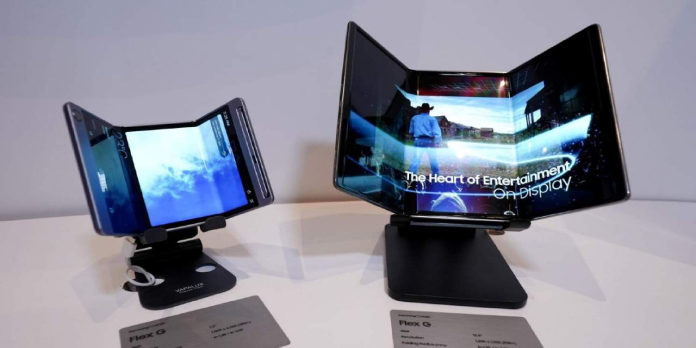 Samsung’s Galaxy Z Flip and Fold smartphones, two foldable versions that have subsequently gotten next-generation updates, caused ripples in the mobile market. However, this is just the beginning of Samsung’s foldable and other flexible display ambitions, as the firm made clear during its CES 2022 presentation.

The foldable prototype display has a laptop-like gadget, tri-fold and z-fold tablets, and even a smart speaker with a flexible display instead of a speaker grille. Although none of these goods is now available, they hint at the types of devices we might see from Samsung in the not-too-distant future.

Samsung has stated that some of its flexible display solutions are aimed at the commercial market and consumers. The folding laptop-like display was highlighted as one possible corporate gadget. Samsung claimed that the flexibility would allow IT employees to easily switch from using a device like a laptop to use it as a full-size monitor.

The “Flex Note” is a folding laptop-like gadget with a 17.3-inch flexible OLED panel that, when folded, has the same form factor as a 13-inch laptop, according to Samsung. However, a folding portable monitor isn’t the only unusual application for OLED display technology, and the company’s 12.4-inch smart speaker prototype is perhaps the best example of what’s possible. A flexible display wraps around the core of this model, which is cylindrical.

Samsung claims that its AI-powered speaker can unfold to morph into a wide, flat display, effectively turning it into a smart display using a companion smartphone app. The business also demonstrated a device called the “Slidable,” a smartphone with a side panel that can slide outward when the user requires more screen real estate.

The drawback is that, at least for now, Samsung hasn’t revealed any plans to bring any of these prototype devices to market. Instead, each device is a concept designed to show off the company’s flexible OLED display technology and demonstrate some of the applications for these panels.