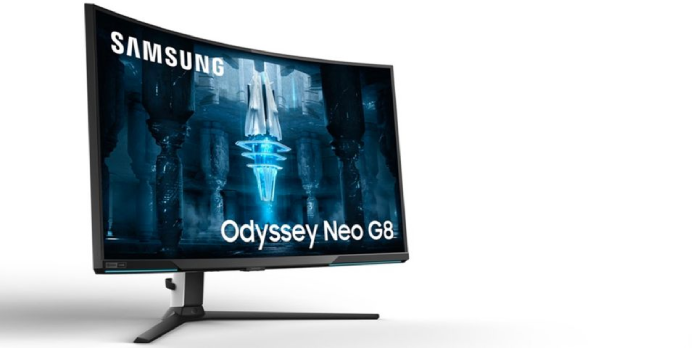 Samsung has unveiled three monitors ahead of CES 2022, including the Odyssey Neo G8, the world’s first 4k 240Hz display.

Samsung has unveiled the world’s first 4K 240Hz monitor, which will debut at the 2022 Consumer Electronics Show. This year’s CES will take place from January 5 to 7. While other firms have withdrawn from the event, such as Microsoft, Facebook, Google, and Amazon, Samsung will be present with several announcements. In addition, the Samsung Galaxy S21 FE is scheduled to be unveiled at the event.

With its innovative Quantum Mini LED technology, the South Korean tech titan has unveiled the QN900A Neo QLED 8K Smart TV. It is one of the nicest displays Samsung has ever included in a television. Micro LED technology has 1.5 times the number of illumination zones as Quantum Matrix Technology, tempting corporations like Apple to replace its iMAC displays with mini LED units in 2022. Furthermore, the Neo QLED 8K Smart TV‘s Mini LEDs provide good backlight dimming control. Samsung has utilized the technology in television sets, and it will use it in monitors that will be released in 2022.

Samsung announced three new monitors from their upcoming lineup in a press release issued on January 2, 2021. During the CES 2022 in Las Vegas, Samsung will make an official announcement about all of the monitors. Samsung’s monitors include the Odyssey Neo G8, the world’s first 4k 240Hz display, the Samsung Monitor M8, and the Samsung S8. Each of the three monitors has its selling point. For example, the Odyssey Neo G8 is aimed at gamers who like high-resolution video games with faster refresh rates, whereas the Samsung S8 is aimed at content creators.

The Curved Screen of the World’s First 4K 240Hz Monitor

As previously stated, Samsung’s Odyssey Neo G8 is the world’s first 4k 240Hz display. A 32-inch display with a 1000R curvature will be included in the monitor. Aside from the high resolution and refresh rate, the monitor will be equipped with Samsung’s Quantum Mini LED backlighting technology, which promises detailed image production and enhanced illumination control. Furthermore, the micro-LED system will feature units 1/40th the size of traditional LED units. The Samsung Odyssey Neo G8 could achieve a peak brightness of 2000 nits with upgraded display technology. DisplayPort 1.4 and dual HDMI 2.1 connectors will be available on display.

Also See:  How to: Fix This File Does Not Have a Program Associated With It

Samsung’s second monitor is the Smart Monitor M8, a 32-inch panel, and a UHD resolution. It will include a web camera that will work with the Google Duo app integrated inside the monitor. In addition, content streaming apps will be pre-installed on the monitor. It can also function as smart television. Finally, the Samsung S8 will be available in two screen sizes: 27-inch and 32-inch, both with a UHD resolution. In addition, it has a USB-C connection and provides 98 percent of the DCI-P3 color gamut. During CES 2022, Samsung will disclose the monitors’ release date and availability.