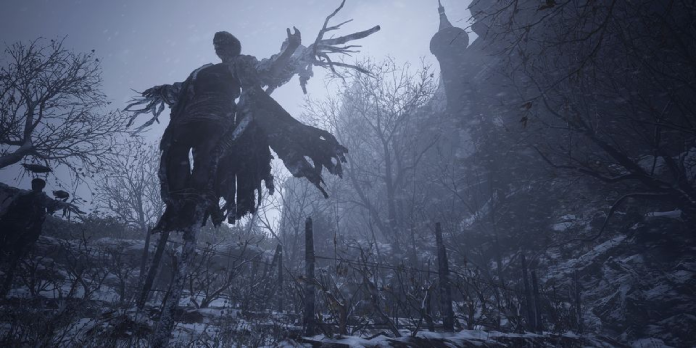 In a fan remake, Resident Evil: Village is transformed into a 2D side-scrolling Castlevania game. Play as Ethan Winters as he tries to get out of Castle Dimitrescu.

An indie developer has created a side-scrolling demake fusing Resident Evil Village and classic Castlevania. While taking design cues from the original Castlevania, the game is set in Castle Dimitrescu, which comprises the early sections of RE Village. Players take control of Ethan Winters as he travels through the castle, fighting the creatures that lurk there with a gun and melee weapon.

RE Village, which was released in May of this year, received a lot of positive feedback and sales. The game maintains the first-person perspective introduced in RE 7 but focuses on more action-oriented gameplay. Many fans of the original RE enjoy the game’s early sections, where Ethan Winters tries to flee Castle Dimitrescu while being pursued by lady vampires. Lady Dimitrescu‘s towering height and striking appearance, inspired by 1930s attire, made her the subject of many social media memes even before the film’s release.

Developer OcO has released the fan demake Residentvania on itch.io, as first reported by PCGamer. The game adopts the original Castlevania’s side-scrolling perspective while setting players in Dimitrescu Castle from RE Village. According to the Residentvania itch.io page, OcO worked on the game for two months and was inspired by Castle Dimitrescu’s resemblance to Castlevania. Many fans have since posted videos of their Let’s Plays in the comments section. Fan remakes of Resident Evil are nothing new. A fan recently created a Resident Evil 1 remake in which the classic game was remade from a first-person perspective.

When Ethan Winters defeats one of Lady Dimitrescu’s daughters, she graces the demake. Then, just as Ethan’s head flies across the ground, she enters the screen while smoking. The pixel work does a good job of portraying the characters, and the castle’s design keeps the original game’s atmosphere while also incorporating classic Castlevania level design. While OcO is currently working on other projects, some fans want Residentvania to be a longer game that includes all of Resident Evil Village’s other sections. It’s Still Out There, a survival horror inspired by Subnautica, and Abduct And Destroy!, a procedurally generated shooter, are two recent projects on which OcO has worked.

Fans of previous Castlevania games will find something new to enjoy as well. Castlevania Advance Collection, which includes beloved GBA titles like Circle of the Moon and Aria of Sorrow, was recently released on various platforms by Konami. The wait for Resident Evil 9 and possible future remakes continues, but Capcom has confirmed that Resident Evil: Village will receive DLC.