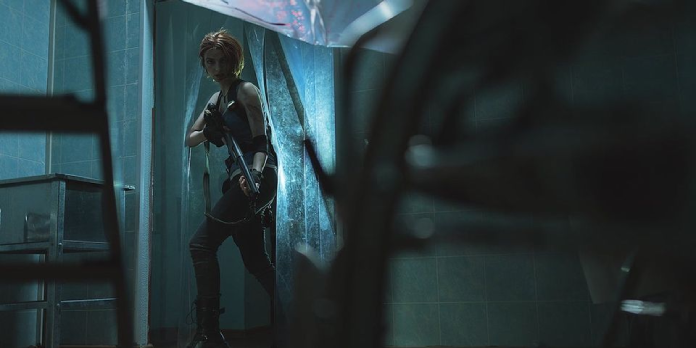 Jill Valentine, the protagonist of the Resident Evil series, uses her iconic arsenal to fight off an aggressive undead foe in this extremely accurate Resident Evil cosplay.

Jill Valentine faces off against a zombie in a fantastic Resident Evil cosplay, one of the survival horror franchise’s most prominent protagonists. Over the years, the spooky series has featured a variety of protagonists, from veteran monster hunter Chris Redfield to determined civilian Ethan Winters. Since its inception, Jill Valentine, an elite police officer, has been a staple of the Resident Evil series. Her popularity has allowed her to appear in other games such as Dead by Daylight.

Jill Valentine has become synonymous with Resident Evil, which has led to her frequently appearing in crossovers as the franchise’s representative. She’s appeared in the Marvel vs. Capcom fighting game series alongside characters like Chris Redfield, with her most recent crossover appearing in Dead by Daylight. Multiple survivors are pitted against a single powerful killer in this multiplayer survival horror game, which is a scenario Jill is all too familiar with. Jill Valentine and Leon Kennedy were added as survivors in the Resident Evil crossover and the deadly Nemesis as a killer to contend with. Jill Valentine is also a cosmetic outfit for Zofia in Rainbow Six Siege, allowing players to breach walls and take down enemies while wearing a stylish STARS uniform.

Even though the Resident Evil franchise began in 1996, it has managed to survive today thanks to constant innovation and expansion. Resident Evil Village, the most recent installment in the series, was released in May 2021 to positive reviews. However, it appears that developer Capcom has more news about the gruesome survival series to share before the year is out. New Resident Evil announcements will be made leading up to Halloween 2021 to commemorate the 25th anniversary of the first game’s release and just in time for some seasonal scares. Fans of horror games should keep an eye out for these announcements, including anything from merchandise to new installments in the franchise.

Many fans devote a great deal of time and effort to their cosplays, but mighty raccoon Jill Valentine’s cosplay stands out. From her wardrobe to her arsenal of weapons, the costume and makeup perfectly reflect Jill’s classic appearance. The addition of the zombie cosplay also adds to the performance, accurately recreating the franchise’s undead foes while also providing Jill with something to grapple with for dynamic shots. As fans commemorate Resident Evil’s 25th anniversary, night raccoon pays tribute to an incredible recreation of an iconic protagonist.