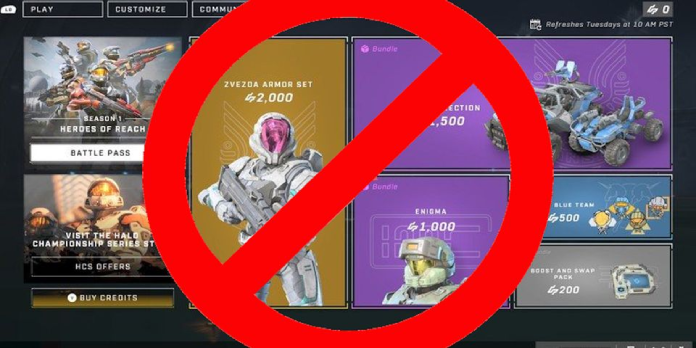 While Halo Infinite’s multiplayer is free, Redditors have called for a boycott of the cosmetic shop due to excessive item costs.

Some fans plan to boycott any cosmetic marketplace purchases in Halo Infinite’s multiplayer due to the high costs in the game’s item shop. Multiple delays and a difficult development have been reported for the latest entry in the sci-fi shooter franchise. However, Halo Infinite‘s multiplayer is now available for free, and Master Chief’s single-player storey campaign will be released on December 8.

Xbox fans were taken aback by the unexpected release of Halo Infinite’s multiplayer feature, which coincided with the cherished franchise’s 20th anniversary. The game’s release marks the first time a Halo game has featured free-to-play multiplayer, which has piqued the excitement of enthusiasts. Unfortunately, while Halo Infinite’s multiplayer is free, the game’s player base has reacted negatively to the number of microtransactions. While basic cosmetic items are available in the standard game, the game’s microtransaction store has the vast bulk of personalization possibilities. Players can’t earn in-game currency through gameplay, which means they’ll have to pay real money for any cosmetics they want. Fans estimate that Halo Infinite’s Season 1 microtransactions will amount to over $1000. Therefore the game’s first season will soon fill the store with goodies.

Reddit user GoobyOfPls advises that players boycott Halo Infinite’s item shop due to the game’s reliance on microtransactions. The post, which has gotten a lot of good feedback from gamers, emphasises that the item costs are too excessive. 343 Industries, for example, will sell a cosmetic belt that is only compatible with a single armour core for $15. GoobyOfPls also alleges that the developer’s concentration on microtransactions violates past commitments, claiming 343 previously stated that armour pieces and sets would be free.

I cannot stress it enough, DO NOT buy the shop items in this game. from halo

While players are understandably upset with the game’s item costs, 343 Industries will hopefully be able to address the cosmetic situation in Halo Infinite in the future. Gamers were also critical of Halo Infinite’s Battle Pass system, a paid progression system that gives a line of rewards by earning points when it was first released. While Battle Passes are a common feature of modern first-person shooters, Halo Infinite’s pass required players to complete particular challenges rather than simply playing the game to progress. After the outrage, 343 Industries changed the Battle Pass system, raising hopes that the game’s item shop may also be tweaked.

Microtransactions are necessary for Halo Infinite to receive revenue for future development as a free-to-play multiplayer game. However, according to the Reddit thread, many gamers believe the prices in the game’s cosmetic item shop are too exorbitant to be deemed fair. While it’s unclear how effective a fan boycott will be, 343 Industries may be tempted to lower Halo Infinite’s microtransaction prices in response to the outrage.

Multiplayer for Halo Infinite is available on Xbox One, Xbox 360, and PC. On December 8, 2021, the complete title will be released.