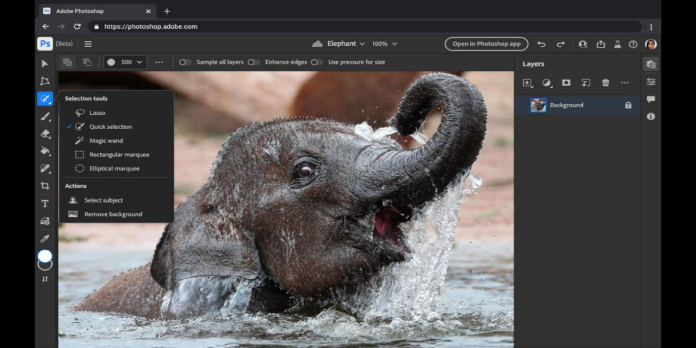 When it comes to image editing and digital painting software, Photoshop has long been the household name. While it currently has some competitors, it remains the de facto standard in the creative sector, despite Adobe’s contentious modifications to how the software is distributed. On the other hand, its cloud-based revenue model may have certain advantages, one of which is that it makes Photoshop almost universal by making some of the app’s capabilities available through web browsers.

In only the last few years, browsers have come a long way. Access to more resource-intensive applications, such as 3D gaming, has been made possible by accessing hardware such as graphics processors. It’s evolved into a fantastic platform for file sharing and collaboration and for working directly on papers and, in this example, photos.

In a word, it required a lot of work and waiting for technology and standards to fall into place before Adobe introduced Photoshop on the Web. It also necessitated working with browser developers such as Google to ensure Photoshop runs and functions properly on Chrome or Chromium-based browsers. You still can’t utilize all of Photoshop’s functions, but the recent news makes some of them available to the general public.

To open a Photoshop file in a web browser, you’ll need Adobe Creative Cloud membership. While capabilities like commenting and annotation have always been available, this beta version adds the ability to modify layers, select areas, and apply masks. For this initial launch of Photoshop’s web version, Adobe says it concentrated first on the most typical use cases, which revolve around editing and modifying photos.

Only Google Chrome and Microsoft Edge are guaranteed to work with Photoshop on the Web, while other Chromium-based browsers may also work. Firefox is expected to arrive at some point, though no date has been set. Adobe says it won’t stop with Photoshop and Illustrator and that it aims to make the full Creative Cloud available through web browsers.