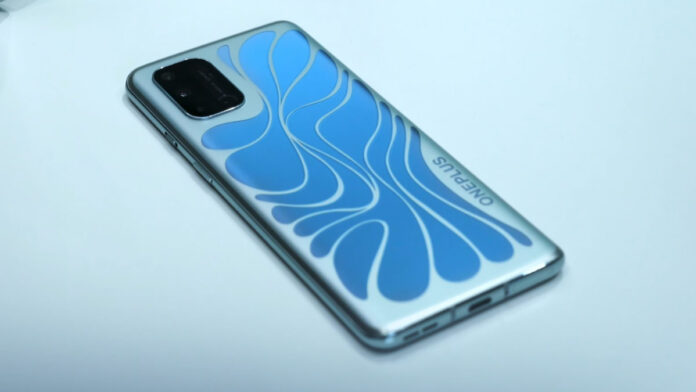 The brand new concept changes color based on events from the mobile’s user interface.

OnePlus is famous for producing phones in exciting colors. It is done blue silver and telephones, so why not have? The business showed off a brand new notion phone nowadays, the OnePlus 8T Concept, which changes color based on applications, switching between silver and blue.

“We prefer to experiment with next-generation technology or designs which are ahead of the time,” the firm said in a statement.

Not much typically becomes of concept telephones. They are a means for phone manufacturers to set up their tech-leadership bonafide using suggestions and materials that would not cut it in real life. But perhaps this version reveals a part of a fad for OnePlus. This past year, it announced a concept phone using an “evaporating” camera, which utilized color-changing magnifying glass; today, the entire rear of the telephone changes color.

The trunk is “that a color-changing movie which includes metal oxide in glass, the valence state of these metallic ions changing under different voltages. Meaning that if the metallic oxide strikes, the color of the glass varies from a dark blue to a light silver,” the firm said.

The color-changing idea, OnePlus states, utilizes millimeter-wave engineering, but not the 5G technology of the same name. Instead, this is a whole lot more like Google’s Soli radar technologies. “Millimeter-wave” only refers to some radio wave from approximately 30GHz to 300GHz, regardless of how it’s used. Lock 5G right now works in 24-39GHz; Soli’s radar is up at 60GHz.

The notion cellphone has a radar detector, which may allow it to “perceive, picture, locate, and monitor objects.” It may then answer the sensor by, among other things, changing the color of the telephone. OnePlus proposed two ways this may work: the rear of the phone changing colors for notifications or calls and being dismissed having an atmosphere gesture; or even the telephone “register[ing] an individual’s breathing” and changing color in sync, and which appears… a little creepy?

Smartphone businesses have been attempting to earn gesture management something for many years now, but it never takes off. Google tried Soli from the Pixel 4 string and ditched it using all the Pixel 5. The LG G8 created a massive deal about expressions, but customers said no offer. Samsung has something where you wave your S’s Pen in the atmosphere, but people didn’t care.

In my view, gesture management fails since it is non-obvious; there is no apparent prompting or UI for whatever you are supposed to do. Therefore folks do not notice or keep in mind the attribute is there.

The color-changing substance, in my mind, has additional possibilities. I would prefer to see it utilized with millimeter-wave in another way: I would like my cellphone to change color as it’s millimeter-wave 5G coverage. With quick 5G still too intermittent, a cellphone that turns liquid silver as it can reach gigabit rates might be a persuasive way to reveal the ability of “5G constructed right.”

That is a concept phone. Therefore it is not “coming out,” But perhaps we will see this color-changing tech on several mobiles in the long run.