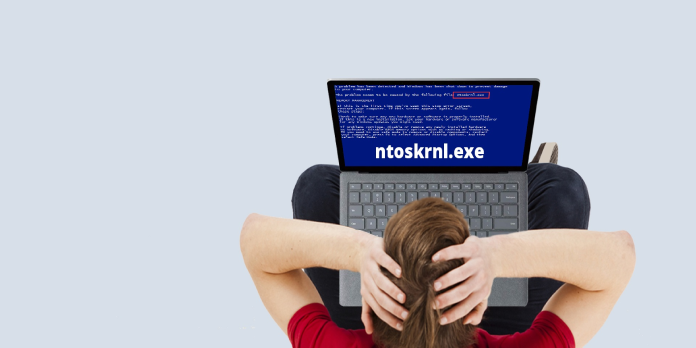 Here we can see, “NTOSKRNL.EXE is missing or corrupt: Fix for Windows XP”

For Windows XP, get the solution to the boot error “NTOSKRNL.EXE is missing or corrupt.”

This Error is linked to the error messages, alerts, warnings, and symptoms listed below.

Symptom 1: On startup, an error message appears stating that ntoskrnl.exe is missing or corrupt.

The ntoskrnl.exe (Windows NT operating system kernel) manages several system services, including hardware virtualization, process, and memory management. After the basic loading subroutines and hardware, detection is completed in the NTLDR and NTDETECT boot files, control of the boot process is given to ntoskrnl.exe so that the operating system can begin loading. If ntoskrnl.exe is missing or corrupt, the boot process is paused, displaying the following error.

One or more of the following factors have been linked to this error:

A boot that has been misconfigured.

The Windows XP bootloader may attempt to load Windows from the wrong drive or partition if the ini file is missing.

If NTLDR tries to load Windows from the wrong partition, it will be unable to locate ntoskrnl.exe, resulting in this error.

Incorrectly installed software, a botched Windows update, a malware attack, or an incomplete Windows upgrade can cause Boot.ini to become misconfigured.

A corrupt boot partition can cause this issue on a Windows XP computer.

An unsafe shutdown, sudden power loss, unsafe removal of a local or external disk, or physical disk damage and/or corruption can cause the boot drive to become corrupted.

Both NTFS and FAT32 filesystems and volumes can have a damaged boot partition.

Cause 3: ntoskrnl.exe has been corrupted or destroyed.

As stated on the error screen, this problem can be caused by a missing or corrupted ntoskrnl.exe file on the Windows system partition. The system partition and the boot partition may or may not be the same (see above).

As a result of an unsafe shutdown, NTFS or FAT32 volume corruption failed Windows updates or virus infection, and the file Windowssystem32ntoskrnl.exe may be deleted or corrupted.

With modern USB/internal keyboards, software-related keyboard difficulties are largely no longer a worry. However, older PCs with a serial interface that use a keyboard may misunderstand the device’s mapped memory as a storage disk, resulting in boot problems like this one.

This error message appears if Windows does not have the necessary drivers to access the Windows system files on the main partition. A botched driver update, changes to the hardware setup, or changes to the hard disk settings in the BIOS can all cause this.

Fix NTOSKRNL.exe is missing or corrupt in Windows

Easy Recovery Essentials’ built-in Automated Repair feature is guaranteed to automatically fix the “NTOSKRNL.EXE is missing or corrupt” issue. EasyRE can be downloaded and produced on any PC and is presently available for Windows XP, Vista, 7, and 8.

Windows uses the ini file to set up and show its operating system choices. Manual instructions for replicating the boot. ini files are also available, but these require some computer knowledge. So instead, the steps below will walk you through automatically recreating boot.ini from the Windows XP setup CD.

If the command prompt displays a message similar to the one below, press Y:

1. When you get a message like this, you should:

You’ll be prompted to give the installation you chose in the previous stage a name that will be allocated to it and shown in the boot menu. Examples:

3. (Optional) If you get a message like this, type /fastdetect and press Enter.

Type in /fastdetect followed by Enter

Here’s an example of what the console output from the PC should look like once it boots up.

Rebooting your computer into “Last Known Good Configuration” mode requires it to use a saved version of the Windows registry from the last time it booted correctly. If the problem is caused by improper, misconfigured, or uninstalled drivers, restarting your computer in “last known good configuration” mode may help. This option is available from the Advanced Boot Options menu at system startup.

Here’s how to use the Last Known Good Configuration option to start your computer. There are also more thorough instructions for setting up your PC using the last known good configuration.

Also See:  How to Never “Safely Remove” a USB Drive Again on Windows 10

If the remedy above doesn’t work and the machine is still using an old PS/2 keyboard, try detaching it and rebooting the computer to see what happens. The steps are as follows:

The NTOSKRNL.exe error has been reported to go away after detaching the keyboard and reconnecting it after some users restarted it.

If ntoskrnl.exe is indeed missing or corrupt, the original ntoskrnl.exe file can be recovered from your Windows XP installation disc.

7. If prompted to overwrite this file, select Yes, and then press Enter to complete the action.

8. Your computer should be restarted.

After the ntoskrnl.exe file is recovered, below is an example of what the PC’s console output should look like:

If a corrupt boot or system partition is the source of the problem, it can be fixed by scanning the NTFS or FAT32 partition for faults or corruption. chkdsk checks the disk for files and data.

6. Restart your computer after the chkdsk process is completed. Take note of any warnings or alarms generated by chkdsk.

Here’s a sample of what the chkdsk.exe console output should look like once it’s finished:

1. How can I reinstall ntoskrnl.exe if it is missing or corrupted?

2. In Windows XP, how do I repair corrupted files?

Use the cmd prompt to repair corrupt files/folders on Windows XP or any other Windows OS.

3. What is the location of ntoskrnl.exe?

It is generally placed in C: WindowsSystem32. Because it is such an important file for the Microsoft NT operating system, malware programmers and cyber thieves have created a virus called Ntoskrnl.exe to cause damage to software and hardware.

Also See:  How to: Fix Games Crashing After Adding Ram

5. NTOSKRNL.EXE is missing or corrupt

NTOSKRNL.EXE is missing or corrupt from techsupport

windows update cannot currently check for updates because the service is...

How to: Fix Your Developer License Has Expired in Windows 10

How to: Change Windows 11 to Classic View