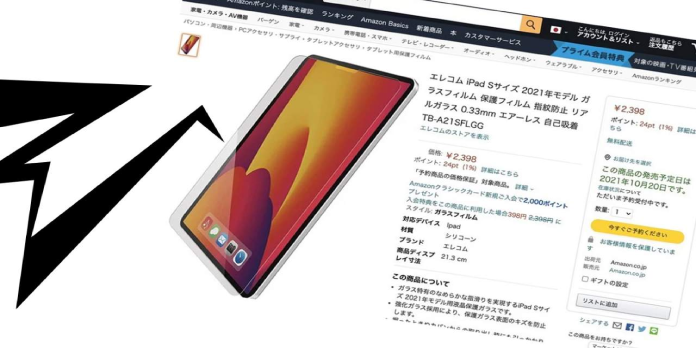 A leak of a new iPad mini has been discovered in the Japanese parts listing. The new device will have an 8.38-inch display and equal-sized bezels across the entire frame. There is no Touch ID front-facing fingerprint reader. The new device could be available for purchase in October 2021.

MacRumors reported that the new iPad mini 6, or as it would be known, was listed this week on Amazon Japan. This new device has a screen that is remarkably small for a protective glass screen. This accessory is usually only released once the accessory manufacturer has confirmed the product specifications.

Leaks from earlier this year indicated that Apple was likely to be making a new iPad mini with an 8.3-inch display. The current iPad mini 5 (available in Apple Stores right now) has a 7.9-inch display. This new device will finally work with the latest iPad design. This new generation features flat sides and a singular feel without the Touch ID fingerprint sensor and front-facing hardware home button.

This new iPad mini 6 is unlikely to be seen at the Apple Event today at noon central, 1 PM ET, 10 AM Pacific. Amazon Japan listed the accessory as an item for sale in early October, suggesting that shipments would occur on October 20. If this is the case, it would indicate that we are looking at an October 19 launch for this new iPad mini.

Today’s Apple event is more likely to feature the iPhone 13 and the new Apple Watch collection. It also features an industrial design that has been modified slightly. We’ll be showing you the iPhone 13 collection, which will reflect what we’ll find in the new iPads later this month or early October.