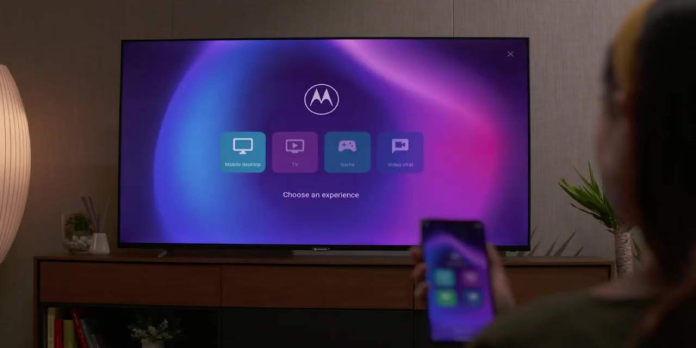 Google recently created a significant statement with the announcement of Android 12L, which finally recognizes the reality of large-screen devices such as tablets, foldable, and even laptops and PCs. Samsung, on the other hand, had been blazing their trail long before that much-awaited day, particularly with Samsung DeX. Motorola recently announced its platform, dubbed “Ready For,” and is now announcing its wireless expansion, which aims to capitalize on recent trends in remote work and social media.

Motorola’s Ready For, like Samsung DeX, was created to provide a desktop-like experience when a compatible phone is connected to a display or a Windows PC. Samsung has since attempted to integrate its Galaxy phones with Windows PCs further, allowing even individual Android apps from the phone to operate as native Windows apps. On the other hand, Motorola is going on a different path with its Ready For wireless features, cutting the cord.

Also See:  Motorola Could Be Working On An All-Screen Smartphone

From the Quick Settings tile on Android, you can quickly access Ready For. When you enable it, it will begin looking for compatible monitors, especially those using Miracast technology. This includes laptops, which often feature built-in streaming functionality. You may even use the Motorola phone’s primary camera as a high-quality webcam with the latter.

Thanks to this additional channel, Ready For can now offer four separate modes, each with its UI and functionality. The mobile desktop interface transforms the phone into a PC, and there are also modes for watching TV and streaming videos, gaming, and even video chat. Ready For even allows live streaming with the phone acting as a camera and the TV as a monitor for the video feed.

Ready For is a Motorola phone available on a few different Motorola phones, including the Moto G100. However, the company is promoting its flagship Motorola Edge for these use cases, which arguably has the specs to support those functions.