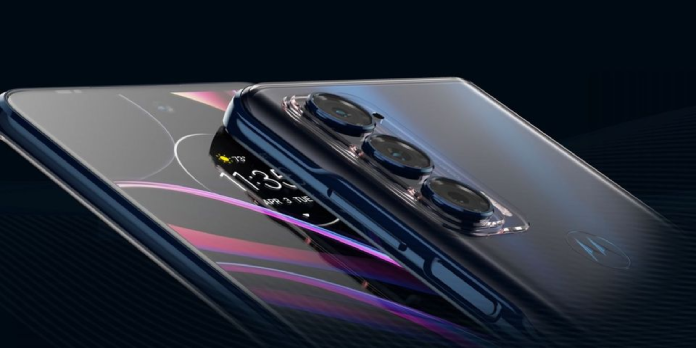 If one screen isn’t enough for you, a Motorola patent outlines a smartphone with displays on the front, side panels, and the back.

A recently issued patent describes a Motorola smartphone with an all-screen display that wraps entirely around the device. In addition, the Lenovo-owned firm has recently begun work on the third-generation Motorola Razr foldable smartphone. According to prior sources, the Motorola Razr 3 would be powered by Qualcomm’s Snapdragon 8 Gen 1 SoC, making it the first Razr smartphone.

Let’s Go Digital discovered a patent for an all-screen display that wraps around a smartphone. According to the journal, there are two patents, one filed in June 2020 and the other in August 2021. The former explores use cases for the touch-wrapped side panels of the smartphone, whereas the latter examines a smartphone in which the frame is covered on all four sides by a flexible display. Both patents describe a smartphone with a big flexible display around the entire device, including the front, sides, and back.

Traditional smartphones include physical touch buttons on both or either side, but with an all-screen display, virtual buttons would replace them. To modify the direction of the interface and the location of the virtual buttons, the gadget will use a gravity sensor, motion sensor, and temperature sensor. The Motorola all-screen smartphone has the necessary connectors, including a SIM card slot and a USB-C port on the bottom and a speaker and microphone. The on/off button and the auxiliary speaker and microphone would be located on the top of the smartphone. Samsung is also working on huge flexible panels, but instead of wrapping them around a smartphone, it aims to fold them.

Although the front-facing camera appears to be situated in a hole-punch cutout in the renderings supplied by Let’s Go Digital, the report does not reveal much information regarding the smartphone’s cameras, save from a suggestion of an under-display camera. In 2019, Xiaomi unveiled the Mi Mix Alpha, a smartphone identical to the Mi Mix. However, due to the difficulty of producing such a huge flexible display at the time, the gadget was never mass-produced. The all-screen device’s use cases and longevity have always been questioned, and the repair cost would almost certainly be far higher than a typical smartphone. As a result, Motorola may not release an all-screen handset like the one described, as is always the case with patents.

The Galaxy Z Fold 3 and Flip 3 Are Already Hits...