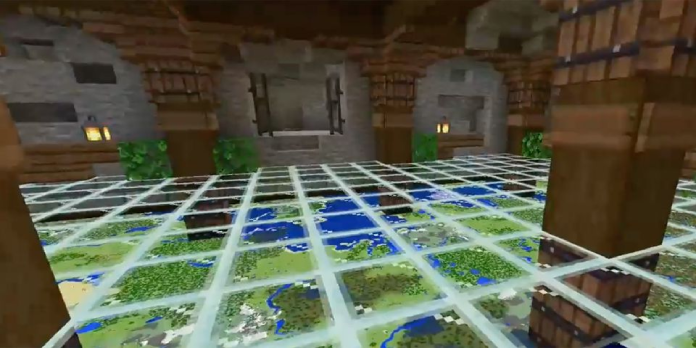 A Minecraft player created a unique map room with a glass floor that allows the player to stand above it for a better perspective.

A dedicated Minecraft player has created a stunning map room with a glass floor, allowing visitors to walk over the construction and observe it from above. While map rooms aren’t new to the legendary survival sandbox game, the quality of the builds is continually improving as the community pushes the limits of what can be built in-game.

Minecraft’s gigantic creations have become a crucial aspect of the game’s identity over the last decade, with some prominent ones spanning entire planets. These enormous achievements can sometimes overshadow many minor achievements that are equally noteworthy in their own right.

Map rooms in Minecraft that display one’s environment can be extremely aggravating because they cause the game to lag simply by being present. Despite this disadvantage, some gamers continue to make them, and the most recent creation offers a distinct perspective.

_Tech Dog, a Reddit member, shared a brief video demonstrating their newest map area, which is concealed in an underground room and can only be entered by pressing a button.

Maps would be great inclusions in some of the more huge productions, like the recently completed Theed City reconstruction from The Phantom Menace, to aid some players to move about, especially if they downloaded an unknown environment. Unfortunately, the larger the Minecraft world becomes, the more lag the game introduces, making maps unfeasible after a certain degree of detail is reached. This is partly because maps are continually updating unless they are explicitly constructed, which can take a lot of time and work.

With advancements in technology, the possibilities of what can be done in Minecraft will only grow. Updated hardware will not only allow for greater creations, but it will also pave the path for new and intriguing mods, restoring the mystery sense of Minecraft. The game is still evolving after a decade, and there are no indicators that it will slow down anytime soon.

Minecraft is accessible on all platforms right now.

Nintendo Is Afraid That Servers Will Be Overloaded During the Christmas...