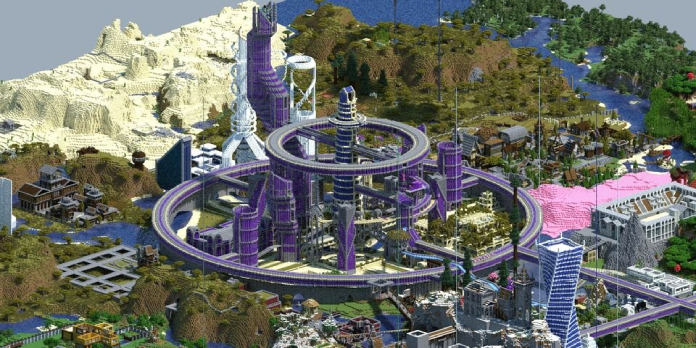 A Minecraft server run by a group of friends houses a fully functional futuristic city that is visually stunning and massive in scale.

A gang of Minecraft gamers has created a stunning futuristic metropolis that would be quite at home in a classic science fiction film. Since its launch about a decade ago, the game has constantly been evolving, with new animals, game types, places, and equipment introduced in the interim. Some users are now requesting that the devs add lovely Capybaras to Minecraft, following the release of the Wild Update and its adorable new frogs.

While players were busy creating new creations in Minecraft, developer Mojang was busy introducing new features, some of which were chosen by the fans. The victors of every Minecraft Live community poll have been tinted blue in some form; it was revealed earlier this week. Following the recent Minecraft Live 2021 mob vote, an astute Redditor discovered this strange pattern. This was a competition between the red Copper Golem, the green Glare, and the bright blue Allay, emerging victorious. The new species joins other Minecraft Live winners, such as the teal Glow Squid, the indigo Phantom, and the Mountain biome in blue in hue.

While fans wait for the Wild update and their new blue ally, a group of Minecraft players has developed an incredible-looking future metropolis in the game. D3RPXD shared this image to Reddit, showing the map from a bird’s eye view, demonstrating the scale of the project. It’s an incredible invention that seems more like a sci-fi game or film than a block-building game. According to D3RPXD’s comments, the server has been running for about three years, resulting in 11 players cooperating. The massive purple skyscraper in the image’s center achieves the game’s maximum height. Meanwhile, the Redditor revealed why he built a large pink area of the city since he had an abundance of pink wool.

A survival server I have with some friends from Minecraft

Minecraft gamers have a long history of inventing and building unique structures. Because of the game’s nature, it’s ideal for people who wish to express their creativity, as it offers nearly endless building possibilities. It’s no surprise, then, that users can accurately recreate something like Big Ben from Civilization 6 in Minecraft.

Minecraft users’ inventiveness has been demonstrated numerous times. The game is well-known for the incredible creations that its players have made with the in-game tools. Even though it is already over ten years old, there appears to be no slowing down in the number of new Minecraft creations, and this is set to continue for a long time.