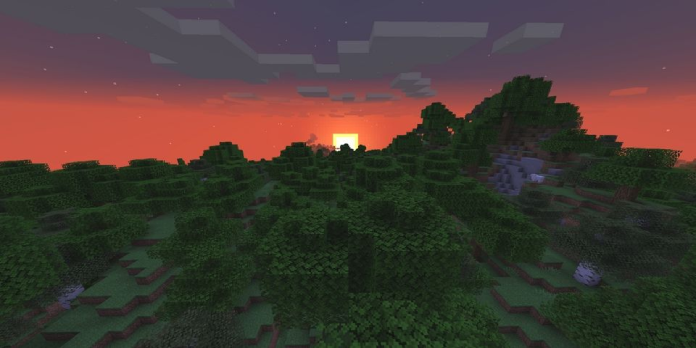 The sunrise was seen in three worlds at once on a Minecraft player’s biome display, bridging the gap between the Overworld, the Nether, and the End.

In Minecraft, a biome display presented the sunrise in three worlds simultaneously, combining the Overworld, Nether, and End into one stunning creation. Minecraft players appear to go to any length to show off their inventiveness, with new constructions sprouting up all over the internet every day. And, as new mechanisms, blocks, and features are added to the game regularly, that inventiveness continues to expand beyond what was previously considered feasible.

The Wild Update, which will be released in 2022, was recently announced by Mojang. The update will add the new Mangrove Swamp biome, a new Frog mob, and the mud block, among other things. When the update is released next year, boats with built-in chests will be available as well. The Wild Update will also change Minecraft’s subsurface, bringing new foes, loot, and other mechanics to Deep Dark Cities. The new blocks, mobs, and dynamics, as with every new Minecraft update, will almost certainly lead to the construction of even more amazing projects as users experiment with new features to push the boundaries of prior brilliance. However, until Minecraft’s The Wild Update is released, players will have to make do with the game’s current state — and its myriad of mods.

Randomfacepalm published their Minecraft biome display, which shows the sunrise in three worlds at once, in a recent build posted to Reddit. The “SLICE OF MINECRAFT 3” build combines the Overworld, Nether, and End into one package, spanning the gap between worlds without using portals. Within a circle, the Overworld sits in the centre of the structure. As the sun rises, a community nestled against a mountain is on full show. The Nether is located on the lower part of the structure, with a Ghast floating quietly from side to side above a pool of streaming lava. The famed Ender Dragon of Minecraft soars through the black sky above a mystery End City in the top half. As the sun rises, it lights all of the worlds simultaneously, perfectly bridging the gap between them.

SLICE OF MINECRAFT 3 is finished!A little sunrise for you… from Minecraft

Randomfacepalm created a flat world for this build, claiming that it was not the result of video editing but rather a full-fledged build. According to the creator, the Minecraft biome display was finished with the help of mods and commands. However, it’s unclear which ones were utilised. While creations like the biome display have no practical value in the survival game, they demonstrate the voxel sandbox’s creative qualities.

Minecraft gamers continue to push the virtual world’s creative bounds. Like Randomfacepalm’s biome display, most creations in the game show off exceptional levels of commitment and innovation. One set of Minecraft creators, for example, created a futuristic metropolis in their server that was a success in terms of size and scale. Given Minecraft’s history, it’s probable that these projects will continue to grow and improve.