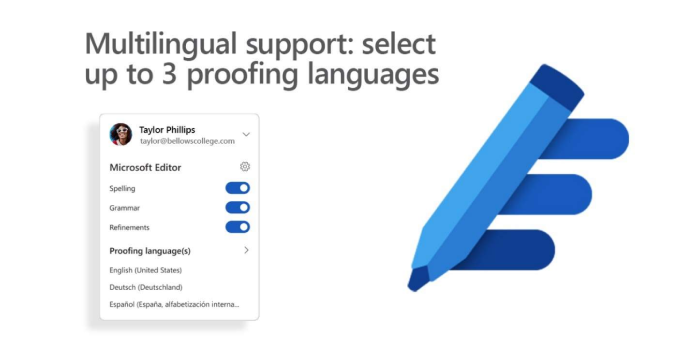 Even though web browsers are used to collect content on the internet, nowadays, its used more than that. They became an Operating system of their own and were used in works mostly which involved office documents. So the usage and need of browsers are high. We need advanced document processing tools. Hence Microsoft comes in by merging its Writing tool with the browser so that we don’t need to sign up for another service.

This is not a new thing for those who use advanced Microsoft Edge. This browser presented an add-on known as Microsoft Editor, with grammar, spelling, and style suggestions. Instead of switching from Microsoft Word to email to select and paste the text, you can do all those inside the web page itself.

Also See:  Microsoft’s support for Windows 10 will terminate in 2025

Grammarly is the popular name in this expertise, and those users will know how easy and efficient this function will be. However, if you need more advanced features, you need to unlock them by paying a subscription.  Both Microsoft Editor and Grammarly work in such a manner, which requires Microsoft 365 subscription.

Microsoft announced that Microsoft editor is no anymore a tool option and has officially become a part of the Microsoft Edge browser. User does not need to look for the add-on; you can simply text in any of the text fields to check on marks for typos or style suggestions.

This functionality separates Microsoft from Google Chrome by presenting additional keys to stand top on the same level as Chromium base. Right now, the new built-in features are being tested inside the Canary and Dev channels. And currently usable only by US Windows users, but let’s hope it will be expanded to all the platforms where Edge is present.

WINDOWSSYSTEM32CONFIGSYSTEM is missing or corrupt