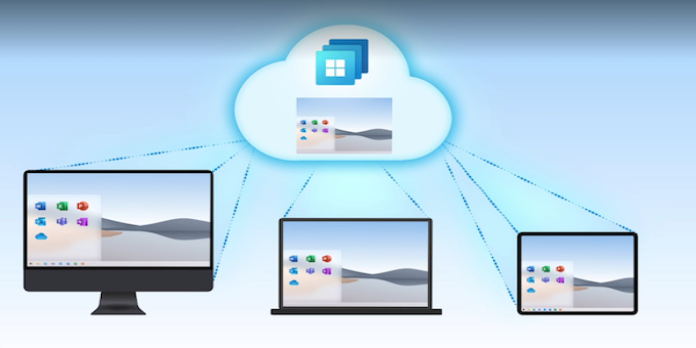 Microsoft has unveiled a new ‘Cloud PC,’ which allows users to stream Windows 365 from any device. So, for example, you can access the full Windows desktop PC and its suite of services from your iPad or MacBook.

Microsoft says that the Windows 365 Cloud PC will first be available to businesses. Many have struggled to get all employees to use the same software since it has become the norm to work from home. No matter what device they have, all will be able to stream the same Windows desktop.

The best part? The best part? You can pick up from where you left off and not modify bookmarks or technical settings each time you switch devices.

The company stated that you could do the same work on a laptop in a hotel, from your car between appointments, or even on your desktop in the office.

Next month, the new software will be available to businesses of all sizes. It will stream Windows 10 first, then move to Windows 11 as it’s released worldwide.

With different pricing per user and month, organizations will have the ability to select the size of Cloud PCs they require. They can also choose Windows 365 Business and Windows 365 Enterprise, depending on their needs.

Although Microsoft has not confirmed whether it will release a version for individuals yet, such a version is likely in the pipeline. The tech giant has been working on Office 365 becoming a subscription model for individuals for several years.

The first Cloud PC for every organization on the planet. https://t.co/OdJEr3DApx #Windows365 pic.twitter.com/8poKUWqZPP