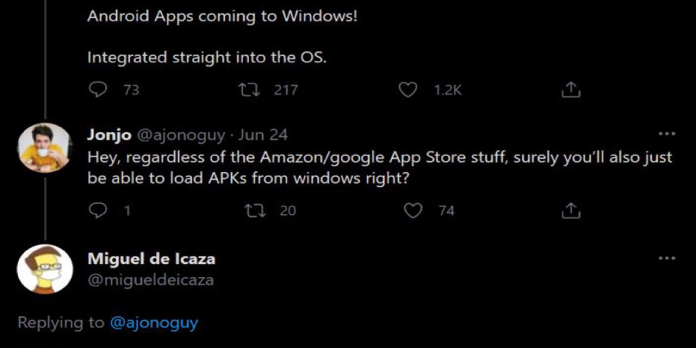 We were able to experience several exciting new features at the Windows 11 unveil event. One of these features is the ability for Android apps to be installed and run on Windows 11 as regular programs via the Amazon Appstore. What about those cases when an app you require isn’t available in the Appstore?

Amazon and Intel have partnered to bring Android apps to Windows 11. This is possible because of Intel Bridge Technology. This technology is crucial as it allows applications to run natively on x86 devices. It also allows applications to run on Windows. In other words, apps that are compiled for mobile devices can be used on desktop processors. Unfortunately, Microsoft did not mention that apps could be purchased through Amazon’s Appstore. This is, by some accounts, not the best.

Intel Bridge Technology will allow any app to run. Miguel de Icaza, a Microsoft employee, tweeted that Android apps would be coming to Windows 11. @ajonoguy then asked if APKs (or Android Application Packages) could be sideloaded onto a PC without the need for an app store. Icaza replied that it was possible. This is great news for those who want to avoid Amazon. This would allow people to download APKs wherever they want, which makes life much easier.

Although security concerns with sideloading APKs onto PCs, Microsoft has made everything safe, so it shouldn’t pose any problems. Nevertheless, it is great to see Microsoft allow this type of non-standard use. Let us know your thoughts in the comments below.

Also See:  How to: Get Windows 11 Right Now For FREE