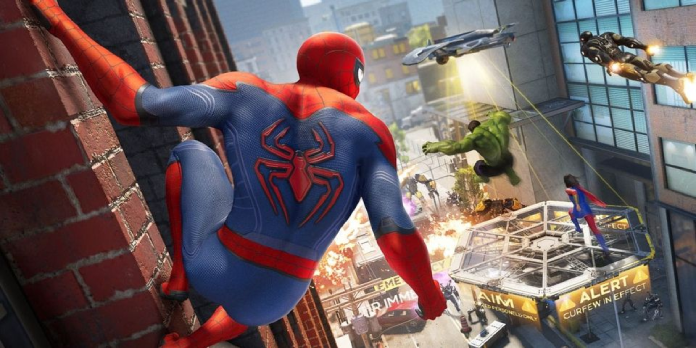 A new Spider-Man skin based on his pre-superhero days as a wrestler has been revealed by Marvel’s Avengers ahead of his DLC release next week.

Unlike prior post-launch characters such as Kate Bishop, Hawkeye, and Black Panther, Spider-Man’s Avengers Marvel’s content will not include a significant plot campaign like the Marvel’s Avengers: War For Wakanda expansion, which was released this summer. Instead, players will be able to hear Spidey’s story through audio logs and illustrated sequences unlocked by completing Avengers Initiative missions. In addition, Crystal Dynamics has promised about 40 additional Spider-Man alternate outfits for Marvel’s Avengers, including the 1940s-style Spider-Man Noir suit and the silver-and-black Spider-Armor.

On Twitter, Marvel’s Avengers shared a short video of Spider-Man swinging into action while wearing the Wrestler Outfit, one of the various character skins. In numerous versions of the Spider-Man mythos, Peter Parker intended to use his arachnid-inspired abilities to achieve popularity as a professional wrestler, only to be pushed down the road of a crimefighter by the tragic loss of his beloved Uncle Ben. Spidey is dressed in a plain red sweatshirt, black trousers, and a metallic blue-and-red luchador mask that mimics the iconic red cowl he would later don as a hero in video game adaptations like the Insomniac-developed Marvel’s Spider-Man.

When Peter Parker first got his powers in the comics, he tested them out in a wrestling match that he easily won.

The Wrestler Outfit for Spider-Man is our modern take on what he might wear for a match in Marvel's Avengers. 🤼 pic.twitter.com/NuxahqF1v2

The planned Marvel’s Avengers version of Spider-Man is unrelated to the PlayStation-exclusive Marvel‘s Spider-Man series. Instead, it depicts Peter around a year into his career as a costumed crimefighter. Spidey will team up with Earth’s Mightiest Heroes to stop A.I.M. from upgrading their robotic Synthoid army in Marvel’s Avengers. A new illustrated trailer shows him hanging out with Ms. Marvel and Black Widow when he isn’t fighting the forces of evil. Marvel’s Spider-Man creator Insomniac recently praised Crystal Dynamics for its take on Spidey’s classic red-and-blue Iconic Suit design shortly after it was unveiled earlier this month. Marvel’s Avengers team celebrated the hero’s impending arrival by re-creating the old “Spider-Man Pointing” meme on social media.

Also See:  Trump's Back on Social Media and This Time He's Got His Own Platform

Marvel’s Avengers has received a lot of flak for its firm reliance on microtransactions as a live-service game, with one player calculating that purchasing every attainable skin and cosmetic item in Marvel’s Avengers’ online marketplace would cost over $3,000. After the With Great Power Hero Event begins on November 30, Crystal Dynamics has vowed to begin implementing a means for players to earn Marvel Avengers cosmetics through gameplay, which will be excellent news for fans eager to swing around in one of Spider-numerous Man’s different costumes.