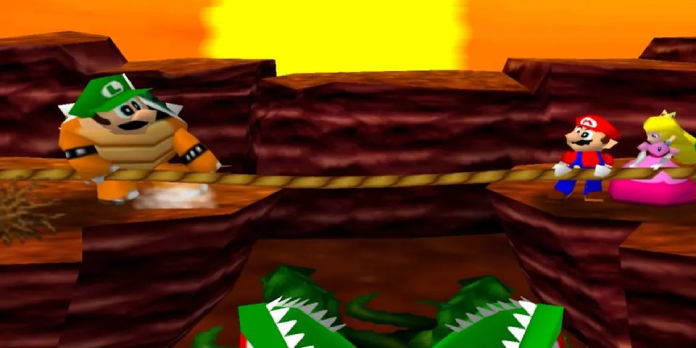 In Mario Party Superstars, the classic tug of war mini-game returns, but with caution, instructing players not to use their palms.

Mario Party 1’s rotating control stick mini-games are notorious for giving players blisters back when released on the Nintendo 64. Players would rotate the control stick to draw the opposing team into the piranha plant during tug of war. Many players, however, would rotate the control stick with the palm of their hand to obtain an advantage, which could result in injuries such as blisters on their hands. In reaction to the injuries sustained by children, Nintendo supplied protective gloves and advised players not to play Mario Party mini-games with their palms.

This advice is carried over into Mario Party Superstars’ version of tug of war. User KirbyCheatFurby shared an image of the mini-game, which showed that it appeared to have the identical controls as the original, but with a warning label. To avoid harm, the label advises players not to rotate the control stick with their palms. Because certain ISPs have early copies of Mario Party Superstars, information has been seeping on the internet.

THEY'RE BRINGING THE ORIGINAL CONTROLS FOR THIS GAME BACK, JUST WITH A PALM WARNING? NOOOOOOOOOOOOOO pic.twitter.com/NUZUkguvqk

The reappearance of this mini-game has been met with mixed reviews. Some people in the tweet above didn’t want the mini-game at all, while others were worried that it might damage the joy-cons, which were already malfunctioning. However, the warning label does go some distance toward preventing tug of war injuries. It also permits Nintendo to avoid liability for any injuries sustained by gamers if the warning label is disregarded. It’ll be interesting to watch how players react to this updated version of Mario Party’s tug of war, but perhaps there will be far fewer injuries than there were when the series initially started.

On October 29, 2021, Mario Party Superstars will be released for Nintendo Switch.