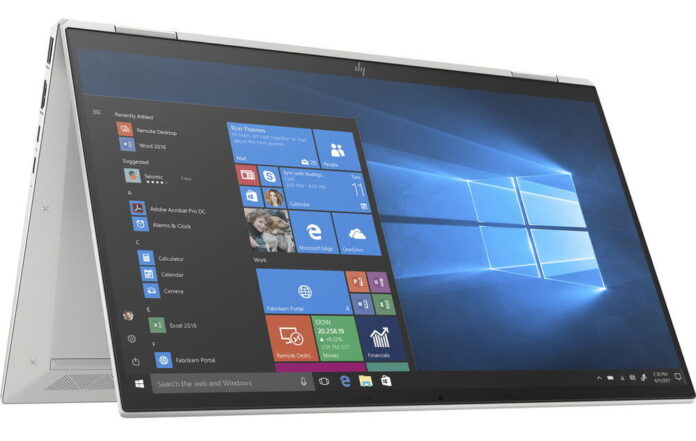 For the past few weeks, I’ve been using a series of new enterprise laptops, including the HP EliteBook x360 1040 G7, the convertible version of HP’s high-end enterprise laptop. All of the laptops in this category are fine machines, with relatively similar features. Each has its pros and cons, but HP differentiates its EliteBook 1000 series this year with features aimed at improved security and better video conferencing. The x360 designation means this is a convertible version, with a 360-degree hinge, so it includes both a touch display and a pen, which magnetically attaches to the side of the keyboard.

At first glance, the EliteBook 1040 G7 looks pretty much as it has for a while, with an aluminum and magnesium chassis, but it’s a bit smaller than previous versions. As with several current laptops, including the Dell Latitude 7410, the bezels around the screen have been significantly reduced, meaning that you can have a smaller machine body but still have a 14-inch display. It has a screen-to-body ratio of 89 percent, and overall is about 6 percent smaller than last year’s model.

HP says it has improved the keyboard this year, and it does seem a bit better. In general, I’d rate it as a bit better than the Dell keyboards and a bit worse than the X1 Carbon. Over the year, as machines have gotten thinner, I find keyboard feel has suffered. It also has a lovely large glass trackpad. The keyboard has been redesigned to include a few new buttons on the function key row at the top. One of these lets you set it to launch a website, application, or open a specific file, which can be useful. Another electronic switch closes a shutter behind the webcam, which HP calls “Sure Shutter.” This worked fine, though I think mechanical switches work just as well. A third is the power key, which has moved from the side of the unit. The new location is better when you are using the machine like a laptop, which people do most of the time. Another change this year is that the fingerprint reader is now built into the keyboard’s bottom row. I found this worked ok, though I’m not sure it’s the most prominent location.

It has a decent selection of ports, including a USB-A port on both sides, two USB-C/Thunderbolt 3 ports (which are also used for charging), and HDMI on the right side. There’s also a SIM port on the left side for use with the optional LTE cellular modem. Unlike some competitors, it lacks a microSD card slot.

The unit I tested was the line’s high-end, with a Core i7-10810U processor and 16GB of RAM. This processor has six cores and 12 threads, with a base frequency of 1.1 GHz and a max turbo of 4.9 GHz, along with Intel vPro support, which adds some enterprise management features.

As with the new Dell machines, HP has added an aware presence feature where the machine uses a proximity sensor (a time-of-flight sensor) to determine when someone is in front of the machine, and then automatically locks when you leave and wakes when you return, integrating with Windows Hello for unlocking. It worked quite well.

HP continues to have a wide variety of unique security applications. Sure Start protects the BIOS from attack and now theoretically supports blocking specific Thunderbolt attacks. Sure Run works with a separate endpoint security controller to let you access the hardware if the operating system is compromised. Sure, Click isolates each tab in your browser into a separate virtual container so that malware would have no ability to get data from any other tab or the computer. Sure Sense is an anti-malware service that tries to detect persistent threats. These are generally great ideas but may require additional testing—I had trouble running my MatLab tests with SureSense enabled.

HP says this version is designed to be particularly good for the kind of audio and video conferencing we’ve all been doing the last few months, and it did seem very good for that. It has four speakers, two front-facing microphones, two world-facing microphones, and an “AI-based” noise reduction feature designed to reduce extraneous calls. I thought the audio was quite good for a small machine. The web camera produced slightly better results than I’ve seen on the X1 Carbon and the Dell machines. It has a wide field of view and shows an excellent decent level of detail. It was often quite bright but sometimes looked a little blown out.

Also See:  How to Set Up and Configure Your Amazon Echo

Another change is that HP has placed the WLAN antennae on the top rather than on the base, providing better Wi-Fi performance. I’ve never had an issue with Wi-Fi with any of the recent machines I’ve tested, but it couldn’t hurt.

Another piece of software is called Quick Drop. It lets you wirelessly transfer files or photos between the PC and Android or Apple. It’s not something I do a lot, but it’s an exciting alternative to the newish Your Phone application in Windows.

Overall, the HP EliteBook x360 1040 G7 is a lovely enterprise laptop with excellent performance and improved web conferencing features. It has some unique features, mainly for security and web conferencing. New things such as an improved keyboard and the presence-aware sensor make it more convenient than previous generations. Enterprise laptops are not flashy, but HP has an excellent high-end offering here.

Living with an HP EliteBook 845