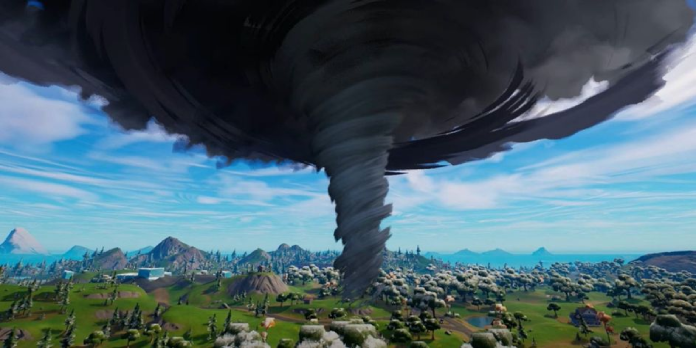 Version 19.01 of Fortnite Battle Royale was released on January 11, and it adds tornadoes and lightning to the mix.

Version 19.01 of Fortnite Battle Royale included dynamic weather in the form of lightning and tornadoes on January 11. The latest patch for Fortnite Chapter 3 Season 1 is V19.01, published late last December 6 by Epic Games. The third chapter, in particular, included a brand-new map and new characters, including Dwayne “The Rock” Johnson’s Spider-Man and the Foundation.

Chapter 3 also introduced several previously unseen mechanics, such as camping, sliding, and swinging. Unsurprisingly, the Spider-Man-inspired swinging action has proven to be a hit with both veteran Fortnite players and beginners. According to recent leaks, more intriguing additions are expected to join the fun soon. According to one source, Epic Games is working on a “No Build” mode for the free-to-play game. According to a source close to the business, the Teenage Mutant Ninja Turtles will make their Fortnite debut thanks to a purported contract between Paramount and Epic. While there’s no word on the rumoured leaks, there is one new piece of content that users can check out starting today.

According to today’s forecast, Fornite has gotten new dynamic weather elements, which have unleashed lightning storms and tornadoes across the Island. However, others may see these new additions to the Island’s components as a blessing rather than a punishment. While being struck by lightning may do some harm, Epic Games claims that the impacts will also provide a “temporary speed boost.” It’s also unlikely that lightning will strike again in a row. Tornadoes can also benefit players, acting as a form of escape method. Even better, if the storm hurls them back to solid ground, users won’t suffer damage from the fall. The studio also confirmed recent Flare Gun speculations, stating that V19.01 unlocks the Flare Gun, which can be found in chests, supply drops, and on the ground.

Read all about some new weather arriving on the Island.https://t.co/hl7C7gKV0g pic.twitter.com/wqiGcSZM3X

The latest Fortnite update is followed by Tornado Week, which runs from now through January 17 at 9:00 a.m. ET. Players have an increased probability of running into cyclones during this period. However, the Flare Gun and dynamic weather are not available in Competitive Playlists.

Fortnite remains at the top of its game in the battle royale genre, even with games like Call of Duty: Warzone nipping at its heels. The former was so popular in 2021 that it filled out the top ten most talked about games on Twitter.

Fortnite is now available for download on the Nintendo Switch, PC, PlayStation 4, Xbox One, Android, and iOS devices.

The Director of Mortal Kombat 11 Discusses a Skin Pack Featuring...