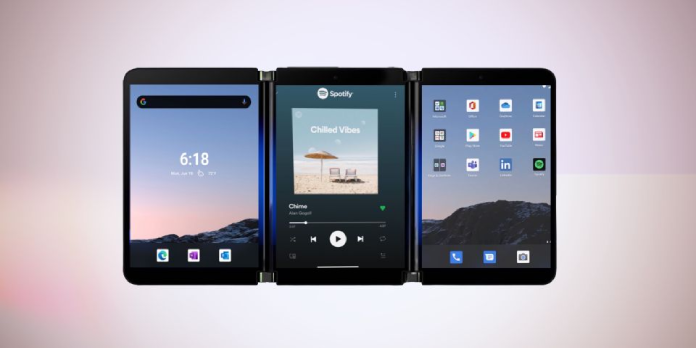 The Redmond-based company has filed a patent for a Surface with three displays, but will it succeed where the dual-screen variants have failed?

According to a new Microsoft patent, the corporation is working on new concepts for its upcoming Surface smartphone. The Redmond-based company has a long history in the mobile phone industry, much of it characterised by failure. It was usual to see a stripped-down version of Microsoft’s Windows software running on smartphones until the mid-2000s. However, with the introduction of the iPhone in 2007 and the subsequent emergence of Android devices, it was evident that Microsoft would have to alter its strategy. As a result, Microsoft put a lot of money into its Windows Phone business, but the risk didn’t pay off, and the unit was shut down in 2017.

With the $1,500 Surface Duo, a dual-display foldable running Android, Microsoft re-entered the smartphone market in 2020. The book-like handset seemed to fit the bill in terms of design with sleek lines and a multi-angle hinge. However, many users deemed its out-of-date internals and sluggish software insufficient to warrant such a premium price. Microsoft gave it another attempt with the Surface Duo 2 in 2021, and while it was able to address some of the initial difficulties, the gadget failed to ignite the market.

Despite its lacklustre comeback to smartphones, Microsoft appears to be far from relinquishing control of the mobile phone ecosystem. According to a newly revealed US Patent Office petition, the company is considering a smartphone with three folding screens. In addition, the company has created a diagram showing how the handset’s two hinges allow the displays to open and close concertina. TCL, a rival device manufacturer, had demonstrated a similar concept.

Prior to the launch of Surface Duo, there was a filing system in place

The most intriguing feature of Microsoft’s patent filing is that it was filed several months before the first Surface Duo was released. As a result, while the business was defying expectations with its first foldable, it was also developing even further out. However, as previously said, the reception to the Surface Duo lineup has been lukewarm at best. As a result, it’s logical to assume that Microsoft will devote more effort to improving the twin-screen experience before releasing a tri-fold device.

Also See:  Microsoft Edge is getting a built-in spelling and grammar check

Still, if a new Surface smartphone with a third display is released (the Surface Trio? ), it’s worth evaluating the advantages and disadvantages of such a gadget. Three screens, for example, would almost definitely be ideal for multitasking, but when folded, they would look like a hamburger. Still, adding a panel could increase battery capacity, but all that glass, metal, and plastic weight will almost certainly be a concern. But perhaps the most challenging task for Microsoft will be to find customers willing to pay for so much screen real estate.