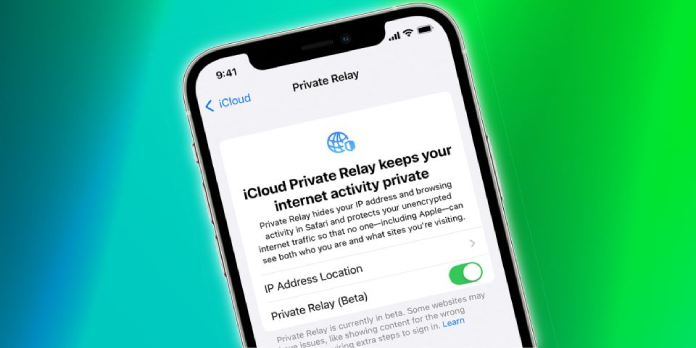 The entry-level iCloud+ membership includes Private Relay for free. While it isn’t a full VPN, it does increase privacy for iPhone, iPad, and Mac users.

Apple now offers iCloud Private Relay, a new enhanced security option that sounds a lot like a VPN. In recent years, Apple has placed a greater emphasis on privacy and security, which makes sense given the persistent threats posed by computer viruses, hackers, and internet disclosures. This means that the user must either have nothing to hide or take extra precautions.

VPNs are popular among businesses because they may be configured to allow employees to operate securely from an unprotected network. Even when using a MacBook or an iPhone to log in from a coffee shop’s public Wi-Fi connection, all data is encrypted, so anyone with illegal access will have to decrypt before seeing any data from the stream, which is a difficult task. VPNs can also be used to conceal a user’s location, which is why some people use them to access content from other countries that would otherwise be restricted owing to copyright issues.

Also See:  How to Use Onedrive’s Direct Share Option

Apple’s iCloud Private Relay works similarly to a VPN in that it prevents IP (Internet Protocol) address monitoring, which would otherwise allow a website to trace the approximate location of an iPhone, iPad, or Mac computer. DNS (domain name server) records are likewise encrypted by iCloud Private Relay to prevent others from seeing which websites are being visited. This is a useful additional layer of tracking protection, although it does not go as far as some VPNs. The fact that a proxy is being utilized is evident. The user’s nation or broad region is still communicated because Apple is not attempting to assist consumers in circumventing digital rights. This is comparable to Google One’s VPN in that it protects security while not allowing copyright infringement.

While iCloud Private Relay may not provide the same level of anonymity as certain VPNs, it is still a useful feature of iCloud. It is included for free with the cheapest iCloud+ membership. iPhone and Mac customers concerned about their privacy can enable iCloud Private Relay for 99 cents per month and get 50 gigabytes of online storage. Better yet, the entry-level pricing allows for family sharing, allowing everyone to use iCloud for photos, videos, and backups.

iCloud+ also has a function called ‘Hide My Email,’ which can produce unique, random email addresses whenever you need to sign up for something. These generated email addresses forward to the user’s actual email address, shielding them from spam and hacking. For those enormous ProRAW photographs and ProRes videos that the entire family may be uploading, more storage is accessible when needed. 200 gigabytes costs $2.99 per month, while 2 terabytes cost $9.99. Even though Apple’s iCloud Private Relay isn’t a complete VPN, it provides value to iCloud+ and secures the user.