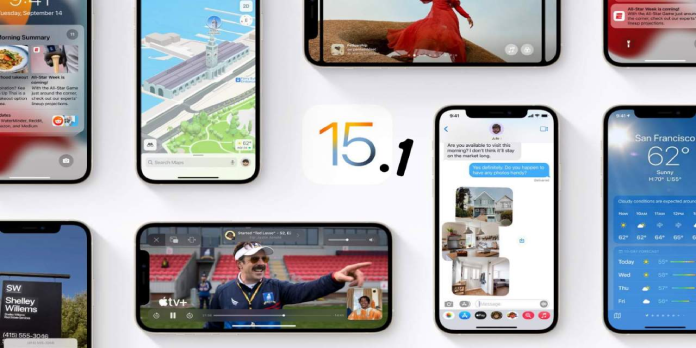 Apple released iOS 15.1 and iPadOS 15.1 today, including a slew of new features and bug fixes. This free update brought fixes for lock screen pausing, WiFi detection, Wallet closing, Photos app storage, and Weather app reporting, among other things. On October 25, 2021, this update included a set of security upgrades for all devices that could run iOS 15.1 and iPadOS 15.1 at the time.

This version corrects a problem with recognising WiFi networks and a problem with Wallet quitting unexpectedly while using VoiceOver many times. This update featured a battery algorithm update for iPhone 12 to improve battery estimates, as well as a remedy for an issue where screen locking could have been paused due to audio playing from an app.

This update corrects an issue in which the Weather app displayed inappropriate colours for dynamic backdrops, and My Location displayed erroneous current temperatures. With this version, an issue that previously reported full storage while importing photographs and videos to the Photos app has been resolved.

The Translate programme now supports Mandarin Chinese (Taiwan) for system-wide translation, a useful function added with this release. This update adds ProRes video capture and a toggle in Camera settings to turn off automatic camera switching for macro photos and videos if you have an iPhone 13 Pro or iPhone 13 Pro Max.

This version adds a slew of new SharePlay features. FaceTime users will be able to use screen sharing. Users will be able to continue a FaceTime chat while watching a shared video on an Apple TV. Everyone on the conference may pause, play, rewind, or fast forward the video content using shared controls, and smart volume automatically lowers audio when someone on the call is speaking.

By the end of today, October 25th, 2021. To participate, you’ll need an iPhone 6s or later, and iPod touch (7th generation), or one of many iPad models (for iPadOS). iPad Air 2 or later, iPad 5th generation or later, or iPad mini 4 or later are required for iPadOS 15.1 to run.

tvOS 15.1 for Apple TV 4K and Apple TV HD and watchOS 8.1 were both released today. You’ll need an Apple Watch Series 3 or later to obtain the watchOS 8.1 upgrade. A security upgrade for macOS Cataline, macOS Big Sur 11.6.1, and macOS Monterey 12.0.1 was also issued today by Apple.