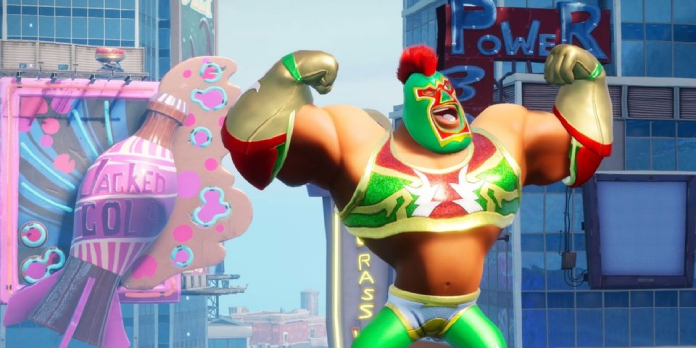 Rumbleverse, a battle royale brawler that looks like Fortnite meets WWE, will be released in 2022 thanks to a partnership between Iron Galaxy and Epic Games.

Rumbleverse, a battle royale brawler that looks like a combination between WWE and Fortnite, was unveiled during The Game Awards 2021 presentation by Iron Galaxy Studios and Epic Games. Iron Galaxy, founded in 2008, is best known for fighting games like Divekick and Killer Instinct. The Chicago-based firm has also established a reputation as a port studio, with Uncharted: The Legacy of Thieves Collection serving as its most recent important project in this regard.

The Game Awards were chock-full of unexpected revelations that many gamers enjoyed. There seemed to be something for everyone, from Monolith’s Wonder Woman and the long-awaited Alan Wake II to the already available Matrix Awakens demo and a collaborative The Expanse project from new Telltale Games and Life is Strange: True Colors creator Deck Nine. The awards portion of the event, on the other hand, left a lot to be desired, with spectators saying that the show still has a long way to go if it truly wants to recognise games and the people who create them.

Rumbleverse was just one of many surprises at The Game Awards 2021. Epic Games, the creators of Fortnite, will publish the Iron Galaxy-developed videogame, a battle royale game with a twist. Rumbleverse’s battle royale, rather than being a third-person or first-person shooter, brings 40 people together for a melee-centric brawler-royale, according to Epic’s description. The game has no set release date. However, it will be available in Early Access on February 8, 2022, on PC via the Epic Game Store, PlayStation 4, and Xbox One. Those interested in getting a head start on the game can sign up for Rumbleverse’s Early Access phase on the company’s website. The registration process should be straightforward, as it simply requires an email address and a preferred platform.

There’s no way of knowing how Rumbleverse will work in practice right now because the debut trailer lacks gameplay footage. However, given Iron Galaxy’s history in the fighting game genre, future players should expect an enjoyable and engaging experience.

Also See:  How Do I Add Alarm Clock To Control Center On My iPhone? The Fix!

Epic Games is closing out the year on a high note. Rumbleverse’s announcement comes days after Epic Games released Fortnite Chapter 3 for all platforms. A brand-new island, new characters including Spider-Man, and gameplay concepts like sliding and camp construction are all included in this update for the ever-popular game.

On February 8, 2022, Rumbleverse will be available in Early Access on the Epic Game Store for PC, PS4, PS5, Xbox One, and Xbox Series X|S.