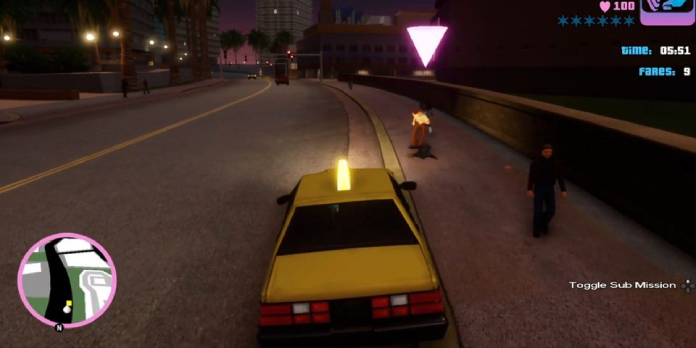 In Grand Theft Auto: Vice City, a player was completing one of the taxi side goals when they saw an officer executing their potential customer.

The taxi side missions are one of the most important components of the Grand Theft Auto games. Since the introduction of these missions in Grand Theft Auto 3, they’ve been changed slightly for subsequent sequels. In these assignments, the player can make extra money by driving a cab and transporting NPCs around town. Players approach potential customers who pay a cab price to be driven to particular locations within a set time. In Grand Theft Auto: Vice City, players’ cabs receive a boost jump ability (100 fares) and a financial incentive. Although taxi side missions have been in the game series for a long time, recent iterations such as GTA 5‘s taxi side objectives aren’t amazing.

To the GTA subreddit, Reddit member Nuzzgok shared a video of their GTA: The Trilogy – Vice City gameplay. Nuzzgok is seen in the video finishing a taxi side objective and looking for another customer to pick up. Nuzzgok notices a passenger hailing their cab, but they cannot pick him up because a police officer is assaulting him. The cop kills the customer immediately in front of Nuzzgok as the player comes to a halt to let the customer inside their taxi.

Violence is prevalent in Rockstar Games’ games, particularly in the Grand Theft Auto series. Furthermore, as the betrayal of Lance Vance in Vice City demonstrates, the game does not shy away from blood scenes. Given all of this, it’s no surprise that Nuzzgok witnessed a police officer killing a customer on the street.

Also See:  There Was a Problem Connecting to Onedrive

Though the graphics of Grand Theft Auto: Vice City doesn’t quite match the quality of today’s games, the updated version included in the Definitive Edition brings the game back to life. According to rumors, Grand Theft Auto 6 will be set in Vice City. If this is true, fans might practice taxi side quests in the original Vice City setting to be prepared.