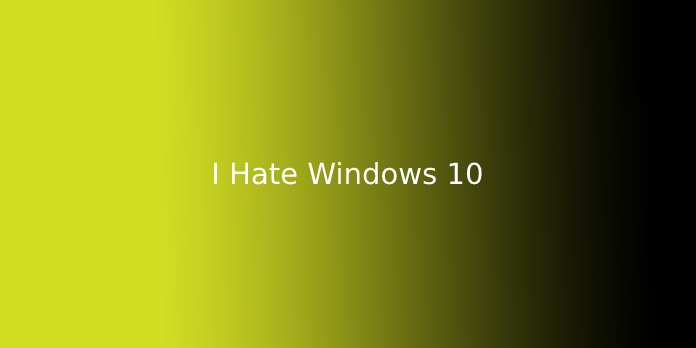 What to do when you hate Windows 10

I usually start this column with “so then needed something done to their PC,” but if I were to incorporate the names of all the people that have written me about how unhappy they’re with their Windows 10 “upgrade,” the file would be so large the server that hosts this page would wish a replacement disk drive. I’ve been inundated with unhappy Windows 10 users for the past two months, and my heart goes bent on these folks. Tons of them were upgraded unsuspectingly, and Microsoft deserves plenty of scorn for its malware-like Windows 10 upgrade tactics. That said, now that you have Windows 10 on your PC and you’re not happy, here’s what you’ll do about it.

1. Keep it, but make some changes

I know this is often probably not what you would like to listen to, but overall I don’t think Windows 10 may be a bad OS like Windows 8 was when it launched. It’s essentially a hybrid version of Windows 7 and Windows 8.1, and it’s getting to be around for a really while in one form or another, so you would possibly also get comfortable with it now. It also offers tons of tweaks that would help it grow on you. Here are a number of my favorites:

2. return to your old OS, aka the Nuclear Option

If you’ve got a replica of your OS on disc or digital media, you’ll always nuke and pave, as we say. Meaning you’ll wipe the disk drive and reinstall the OS from scratch. We generally don’t recommend it, however, because it’s an enormous hassle. If your data files like music, documents, pictures, and such are on an equivalent partition as your OS, you’ll get to copy everything first, reinstall your OS from scratch, then migrate everything back. Now, suppose you followed our previous advice about keeping your OS and data on separate partitions. In that case, you’re in better shape, and situations like this are often exactly why we deploy this strategy. You’ll reinstall your OS without touching any of your precious data.

This one is hard. Say you’ve got a PC from a corporation like Dell, Lenovo, or HP. They’re going to typically ship the PC with a recovery partition, meaning a picture of the system because it left the factory is stored on a little partition, and you’ll restore the PC to that factory condition by employing a built-in utility that you launch at boot. I even have not been ready to test this, but if that partition is for Windows 7 or 8, it seems that installing Windows 10 might render that “old” partition unusable. during this forum thread, the moderator states, “If you upgrade using Windows Update or the. ISO media, your recovery partition will become inoperable.” Therefore, if you’ve got a Windows 7 or 8 recovery partition, make certain to make recovery media before the upgrade, just just in case. If you’ve got physical media that came together with your PC, you’ll also use that.

4. Isn’t there a neater thanks to returning to my old OS?

Not anymore, there isn’t. There was a period during the “free upgrade” era when Microsoft allowed people to undertake Windows 10 for 31 days and return if they were unhappy, but that window has closed. So, for now, you’re cursed with it.

1. Why do numerous people hate Windows 10?

I have been using windows all my life. Windows XP and seven were great (vista and eight were horrible), but Windows 10 has been one of the worst experiences with an OS I’ve ever had. It had been extremely unstable when it had been first launched, and while that has been somewhat improved (it’s still pretty unreliable), I had numerous other issues. The advertisements for shit like candy crush on my start menu were completely unwanted, and while that they had space to put in that among numerous other pieces of bloatware on my computer, they didn’t feel the registry was important enough to backup? I only need to worry about bloatware once I bought a branded laptop from somewhere like HP and that I would install a fresh copy of Windows 7 and be through with it. Now I can not solve this issue with a clean install of windows 10 because Microsoft keeps adding more bloat to the OS by default. After a feature update, Microsoft Teams repeatedly popped up whenever I booted up the pc and uninstalling it had been disabled.

I do not want this shit on my computer, Microsoft. What’s worse than the bloatware are the automated updates. I’m trying to try to do something on my PC when it decides it wants to update. I didn’t decide this, but Microsoft decided it had been an honest time to update, so I assume I had to update, albeit it had been during active hours? And after update 1809, my entire computer wouldn’t boot and was corrupted. I had a backup of my data, but I would’ve lost everything if I didn’t. I had to wipe the disk drive clean, reinstall windows then restore my files from my backup. What the fuck, Microsoft? Beyond these issues I have been having, I hate how Microsoft has shifted to collecting all of its user’s data, starting with Windows 8. Not only with advertisements around the entire OS in places just like the start menu but with user data collection with everything a user searches or does on their PC. A Windows 10 Home license costs over $100, and Microsoft still thinks its acceptable to form money selling my data to advertisers? I’m through with Windows. I’ve bought a Mac. I’ve wanted to use Linux for years since I’ve started hating Windows 10, but I needed applications like the Adobe suite and Microsoft office, where I could not get these applications on Linux. But I’m not carrying on with Windows 10 because I’ve had enough of all the bullshit Microsoft is trying to tug with it.

3. Bought a replacement computer with windows 10. I HATE IT. How do I install windows 7

I have been battling it. Am I able to put seven on my new computer?

I have been employing a laptop for years, and normally there’s a quick adjustment period. But after several weeks, I STILL HATE WINDOW 10.

It isn’t very good. I cannot find the software to regulate my pics. It had been there in windows 7.

So have you ever got that Microsoft!!!! I HATE WINDOWS 10. I would like window 7.

This is not a breakthrough. You plan to take over my life. I’m not on top of things on my computer. It appears to require regulating everything I would like to try to do.

I HATE WINDOWS 10. there’s nothing in Windows 10 that I would like.

I upgraded from win seven ultimate to win 10, it gave me win 10 pros & I want the control of my PC back. How am I able to have full access to my PC? I’m thinking of getting to Linux.

Could you help me out? I want to understand