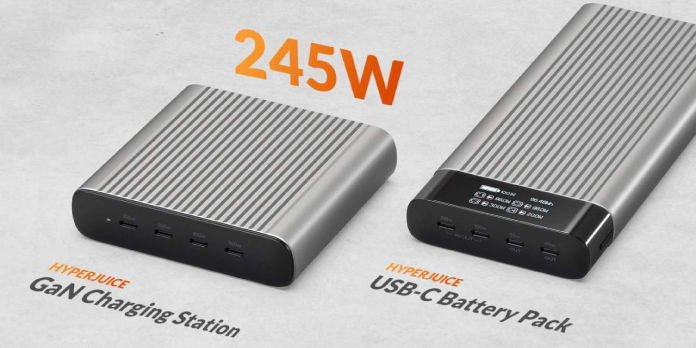 Apple may be overjoyed with its new 140W Charger for the MacBook Pro 2021, but Hyper is already attempting to outperform it with a set of new 245W chargers. These two new HyperJuice models, despite their names, aren’t quite what you’d think – yet it doesn’t make them any less beneficial for most people.

They’re based on the company’s robust 100W GaN versions from last year but with more than double the power for – theoretically – faster recharges. Because of its thermal characteristics, GaN, or Gallium Nitride, is increasingly being employed in high-end chargers. Heat is an unavoidable side effect of charging, which involves converting AC electricity into DC for a phone or laptop device.

The problem is that the more heat generated, the more space between the charger’s components is required, resulting in a larger adapter. GaN chargers, on the other hand, maybe more densely condensed, allowing an adapter capable of powering a laptop to be reduced down to the size of a phone charger. At the same time, GaN’s increased efficiency at conducting higher voltages than silicon results in more powerful chargers.

Although Hyper’s newest models aren’t as compact as some, we’ve seen – or even past HyperJuice models – they’re nonetheless extremely powerful. With four 100W (max) USB-C Power Delivery (USB-C PD) connectors, the HyperJuice 245W GaN Charger is the smaller of the two.

The battery pack, according to Hyper, can charge an iPhone 13 nine times or an M1 MacBook Pro 13 twice. There’s also 100W pass-through charging, which means you can charge the internal battery in approximately an hour while also charging connected devices, and the whole package weighs just around 1.68 pounds.

Despite the large “245W” branding, none of the ports on either model can realistically supply more than 100W on their own. Although Apple’s charger for the new MacBook Pro only has one USB-C port, it still provides 140W of power. That means you won’t be able to fast-charge the most expensive MacBook Pro 16-inch with the HyperJuice chargers.

Still, trying to have a phone, tablet, laptop, and other devices all charged up on the desktop may end up being more useful for most people with most devices. It’s also reasonably priced; Hyper is launching the two new chargers through Indiegogo, with delivery due in December 2021 if all goes according to plan. The HyperJuice GaN Charger starts at $99 (against a “normal” price of $199 after the campaign), and the HyperJuice USB-C Battery Pack starts at $149 (versus a “regular” price of $299 after the campaign).