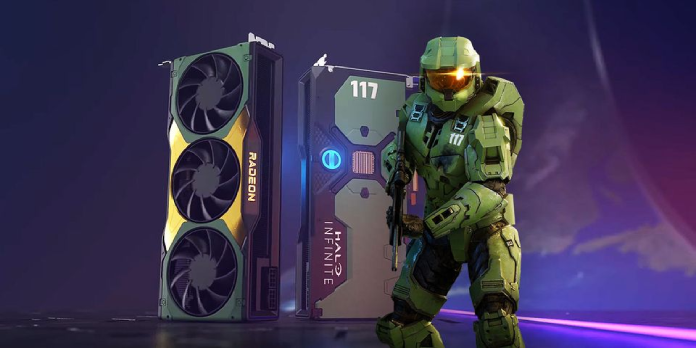 Microsoft has introduced a Halo Infinite-themed AMD Radeon RX 6900 XT graphics card modeled like Master Chief’s distinctive green armor. There are only a few months until Halo Infinite finally releases after being delayed for more than a year due to development issues and negative feedback the game received when its gameplay was first revealed in 2020. As a result, Xbox’s marketing and product promotions for the next Halo have ramped up again ahead of the December release.

With Halo Infinite’s December 8 release date approaching faster than ever, Microsoft has partnered with various firms to generate excitement for the flagship Xbox and PC game. The PC maker is pushing the game from beverage businesses such as Monster Energy and Rockstar Energy to gaming gear manufacturers such as Razer – the latter of which is developing a line of Halo Infinite Razer PC peripherals visibility in practically every manner in light of the protracted delay.

Xbox revealed the new AMD Radeon RX 6900 XT Halo Infinite Limited Edition graphics card in a larger blog post outlining Halo Infinite’s PC version. The company said that it has been working with AMD on the special green GPU for nearly two years and that it was inspired by Master Chief’s newest generation Mjolnir armor for the design of its custom shroud and backplate. The top of the shroud matches Master Chief’s Spartan armor in green, while the middle half is reflective, iridium gold to match his helmet visor. The backplate also has drab green and black to match the character’s undersuit, the Halo Infinite logo, Master Chief’s 117 callsigns, and a circular blue LED light to represent likely Halo Infinite adversary Cortana. According to Xbox, the limited edition AMD graphics card will not be available for purchase, but the company will explain how prospective owners can obtain one in the coming weeks.

The depth of Microsoft and AMD’s involvement with Halo Infinite isn’t entirely surprising, given that AMD hardware powers the Xbox Series X/S and even the Xbox One. So it stands to reason that the two firms would collaborate to ensure that the game looks and works well on both consoles and PC, and the new Halo Infinite Radeon RX 6900 XT is just one of the ways the companies are marketing the latter release in particular. Despite the ongoing global semiconductor shortage, it is hoped that a large proportion of Halo Infinite PC players would be able to get their hands on the new GPU.