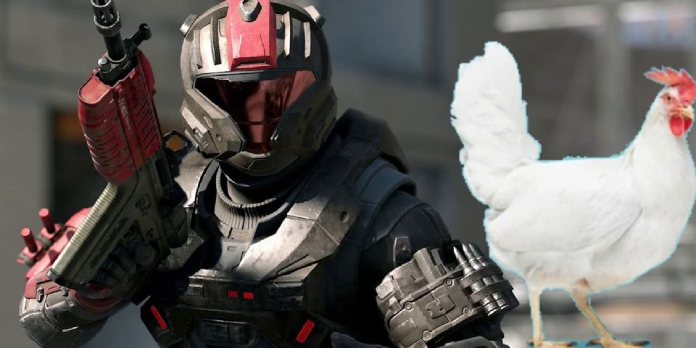 A Halo Infinite player’s kill cam was interrupted by an intruding chicken with excellent comedic timing.

An interloper with excellent comedic timing disrupted the normally solemn event of one sad Halo Infinite player’s death screen. Players have generally reacted favorably to Halo Infinite’s early release, while some problems and errors have been. Players of Halo Infinite, for example, witnessed the dreaded blue screen of death shortly after the game’s debut.

The multiplayer feature for the long-awaited new Halo installment was merely leaked a few days ago, ahead of the game’s expected release. Players have already begun to immerse themselves in the free multiplayer mode, although the campaign will not be released until December. Players are already finding great Easter eggs and techniques in Halo Infinite. The Halo Infinite subreddit and message boards are already inundated with players sharing their cool kills and weird video. Recently, one user shared a video that showcased the game’s equipment creatively and originally. One of the most stunning kills in Halo Infinite’s brief existence was achieved by combining a Repulsor with a Plasma Grenade.

DimberZ, a Twitter user, released their alternative Halo Infinite trailer, which is unquestionably more entertaining while not as stunning. DimberZ is brutally killed in the video, which is a typical occurrence in multiplayer games. DimberZ is joined by an intruder when the kill cam focuses on his body while waiting to respawn. One of the many creatures that populate the multiplayer map in Halo Infinite, a chicken begins to strut across the screen. As DimberZ points out, the timing of the chicken’s appearance is extremely amusing.

The Halo Infinite multiplayer’s adorable, unassuming little gems are one of the reasons 343 Industries has been praised for its efforts. Even if the debut was marred by technical issues, server instability, and a slew of bugs, that’s to be anticipated with any new game. The attention to detail makes amusing situations like DimberZ’s chicken encounter all the more enjoyable.

Despite the difficulties at launch, 343 has been fast to listen to player complaints and make fixes is very encouraging. After gamers complained that the Battle Pass in Halo Infinite was too “grindy,” 343 released a series of improvements to address the issue. Halo Infinite has already dominated the FPS shooter market with one of the biggest launches for an Xbox Studios title. That location, as one player discovered, is home to more than Spartans.

Halo Infinite is currently available on PC, Xbox One, and Xbox Series X.