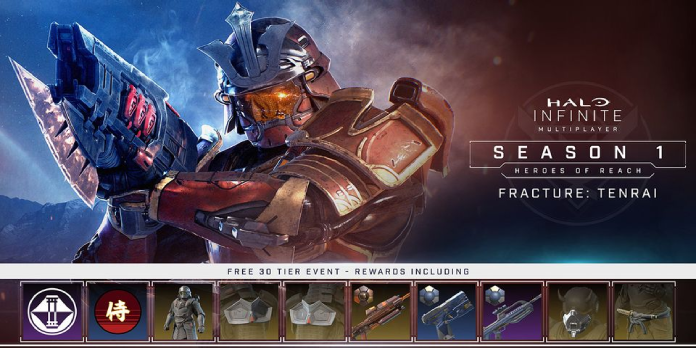 A teaser for Halo Infinite’s upcoming Fracture: Tenrai event has been revealed, including an exclusive unlock of the new samurai armor core.

After Halo Infinite‘s free multiplayer beta release, 343 Industries has released a trailer for the new Fracture: Tenrai event, which will kick off on November 23. The multiplayer feature in Halo Infinite was released a month early to coincide with the franchise’s 20th anniversary on November 15, catching everyone off guard. While everyone has access to the whole multiplayer experience, enthusiasts quickly found personalization possibilities that usual ways could not obtain.

At the game’s launch, many gamers noted that it’s possible to adjust what the game calls Armor Cores, the core of the Spartan armor that changes the player character’s overall appearance, in the character customization choices. This contrasts the standard armor pieces that may be fitted to said Cores, many of which are locked behind Halo Infinite’s expensive microtransactions and battle pass. One of these Cores is known as the “Yoroi,” It has a samurai appearance that differs significantly from the ordinary Mark VII armor. The game previously referred to this customization item as the “Fractures Event: Tenrai,” but no details were provided on what this event would involve.

Following multiple rumors and leaks over the game’s launch week, the official Halo page has tweeted a reveal trailer for the upcoming event with a verified start time of 10 a.m. PT on Tuesday, November 23. During this period, players will have access to a separate set of challenges and rewards for the event that are unrelated to Halo Infinite’s contentious battle pass, with the legendary samurai armor serving as the major prize. The event will run one week, allowing players a limited period to unlock the entire list of rewards in the event pass.

Tomorrow at 10AM PT.

According to a Twitter leak from _FireMonkey, players will be able to gain the armor core at level 5, with additional armor parts and attachments for the core earned at subsequent levels and other minor incentives like nameplates colors and XP increases. According to the creators, Winter Contingency, Cyber Showdown, and Tactical Ops are three further future releases for Halo Infinite’s first season of DLC. More details will most certainly emerge near the end of Fracture: Tenrai; however, there is currently no knowledge regarding these events.

Also See:  Over £ 80 Thanks Have Reduced The Cost Of Some Of The Most Extraordinary LEGO Sets To LEGO City Offers.

Overall, the fast-paced PvP multiplayer in Halo Infinite has been hailed for its in-the-moment gameplay. Still, the previously mentioned battle pass and microtransaction mechanisms are holding back what might otherwise be a great success. Many fans are upset with the new method Infinite handles the franchise’s renowned armor customization elements and would rather pay for the complete Halo Infinite than the existing free-to-play model, but how 343 manages the game’s events could determine an even broader shift to one side or the other. If the game’s events turn out to be more of the same microtransaction-ridden struggle as the previous season of content, more fans will likely abandon Halo Infinite’s multiplayer entirely.

Halo Infinite multiplayer will be available on December 8, 2021, for Xbox Series X/S, Xbox One, and PC.

According to a leak, Animal Crossing: New Horizons may receive holiday...