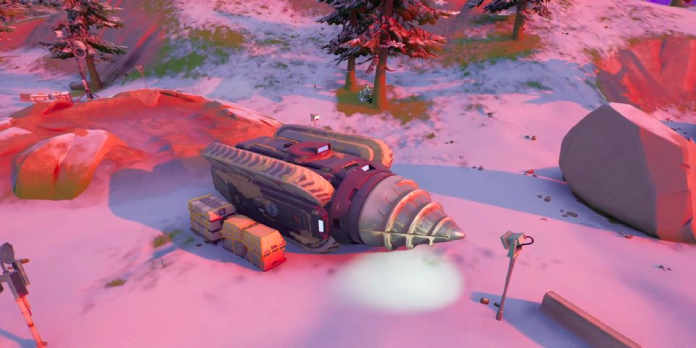 In Fortnite Chapter 3, a new landmark has arisen, revealing the return of the Imagined Order and their attempt to drill through the island.

An Imagined Order drill camp titled Mole Team: Omega has been discovered in Fortnite, showing that the evil faction from Chapter 2 is returning and aiming to drill many holes to the other side of Chapter 3‘s brand-new map. Fortnite’s newest Chapter was recently launched, bringing with it new features, mechanics, and a brand-new flipped map that takes advantage of many of the game’s most recent advancements. Players may now enter the free-to-play multiplayer game with a slew of new features, including characters, cosmetics, and new game mechanics like sliding and swinging, which allow players to move across the battlefield more fluidly than in other battles royale games.

The Imagined Order, introduced in Chapter 2 as one of Fortnite’s main villains, is an ancient organization that has been in charge of “The Loop” for thousands of years. While individuals on Fortnite’s island are trapped in a battle royale for what seems like an eternity due to the Loop, the Imagined Order is notorious for manipulating and traveling among realities using the source of “The Loop,” ultimately threatening to harm the game’s reality. Though the evil organization provided high-tech weapons to Fortnite players in Chapter 2 to help them fight back against the alien army, the next clash is expected to be with the Imagined Order, who will be fighting gamers and The Seven due to their ambitions to stop the Loop.

The Imagined Order appears to have reappeared with new cunning schemes to seize power. A new facility called Mole Team: Omega has been located northeast of Logjam Lumberyard and is being defended by IO soldiers, according to Game Informer. Those who investigate the area will shortly discover that IO has established an outpost on the island and is digging through it. A tent with unusual stuff, including a rocket launcher, can also be found. Similarly, HYPEX, a Fortnite-focused video maker and well-known news account, revealed that as Chapter 3’s snow melts, multiple Imagined Order drill outposts are likely to appear, signaling story progression and the likelihood of an event at the end of Season 1.

Here's what the IO Drill Outposts will look like when they appear on the map 👀 They will start appearing AFTER the snow starts melting which will start on the 7th at 9 AM UTC! pic.twitter.com/t9UInRYlxg

The snow in Chapter 3 is expected to begin melting today, with six phases before completely evaporating and unveiling Tilted Towers’ reappearance. Tilted Towers could become a new Point of Interest on January 18th, if the information is correct, as it will be the last step and the 4th anniversary of the renowned destination. In addition, update 19.10 is expected to be released on the same day, with even more content to expand the Season.

The Imagined Order has played a significant part in Fortnite‘s short history, and its reappearance could signal a catastrophic crash. It’s unclear why the organization is attempting to drill a hole through to the other side of the map, but a conflict might erupt in the multiplayer game’s seasonal cycle.

Dark Souls: The Roleplaying Game Is Announced, and a Teaser Trailer...

Fans of the GTA Trilogy use Steam reviews to push sales...