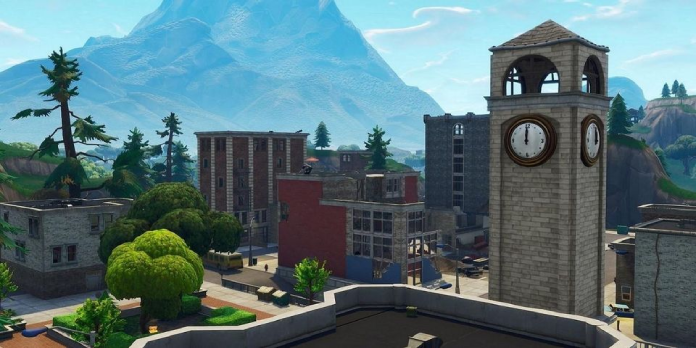 In an official Twitter post, Fortnite teased the return of Tilted Towers, implying that the snow-melting update will arrive tomorrow.

Tilted Towers, which may be added back to the battle royale map in an update coming tomorrow, was previously hinted at by Epic Games. From lightning strikes that provide speed bonuses to Spider-Man web-slinging in Fortnite Chapter 3, Season 1, introduced a slew of new elements. While the new season introduced natural disasters and a new superhero crossover, future Fortnite patches could bring the Teenage Mutant Ninja Turtles and the Green Goblin to the battle royale, according to leakers.

Since its debut, chapter 3 included the battle royale’s third map, populated with new POIs, half of which were coated in snow. The map has many new items to explore, from Chonkers Speedway to Condo Canyon to The Daily Bugle. However, Titled Towers, one of Fortnite’s top Points of Interest and landing locations, is gone from the third stage. Before the map changed two years ago in Chapter 2, the POI, which comprised a pair of high-rise buildings perfect for looting, was one of the battle royale’s longest-running locales. Tilted Towers was said to be returning during Fortnite Chapter 3 last month by a leaker. The map’s snow may melt, revealing several POIs beneath it, including Tilted Towers.

Fortnite teased the return of Tilted Towers on Twitter, posting “One more sleep,” followed by the skyline emoji, depicting a line of high-rise structures, in a likely update coming tomorrow, January 18. Fans feel this is a hint at the reappearance of one of the battle royale’s most popular POIs, Tilted Towers. “One more sleep” could allude to the final night before Epic Games releases the patch that adds the POI to the revised battle royale map.

In Fortnite imagery from Chapter 2, Season 8, Epic Games hinted about Tilted Towers’ return. The graphic was released alongside the announcement of the reintroduction of Late Game Arena mode on October 5, but many noticed Tilted Towers in the lower right corner. While the new tease does not explicitly state that Tilted Towers will return, the tweet strongly suggests that the snow will melt overnight, revealing high-rise buildings — most likely Tilted Towers. Because major storyline events frequently modify the battle royale, Fortnite is no stranger to change. As a result, Tilted Towers could take on a new shape, similar to how it did in Season 5 when it united with Salty Springs. It wouldn’t surprise me if the buildings were remodeled and the loot locations were relocated.

Tilted Towers possessed several strategic advantages, especially early in a game. Players flocked to the now-defunct Fortnite POI because of its high-tier loot areas and numerous hiding spots. It’s feasible that the new Tilted Towers will offer similar strategic advantages, bringing the battle royale to life in various ways. Fortnite Chapter 3 could be one of the best chapters in the game, with web-slinging, natural disasters, and the return of Tilted Towers.