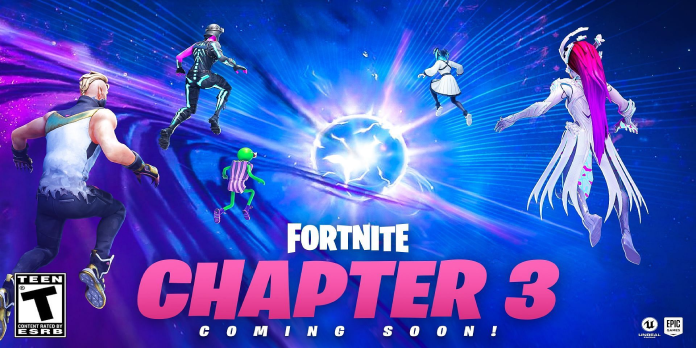 Epic Games had teased Fortnite Chapter 3, implying that the new area in the future chapter will feel like a completely new game, similar to how the popular battle royale game felt when it transitioned into Chapter 2 in 2019. Fortnite Chapter 2 is expected to end next week, on December 4th, after two years, with a major in-game event dubbed “The End.” Preparing for the game’s finale, players will face up against the Corruption Cubes’ creator and commander, with the possibility of a whole new universe being revealed at the game’s conclusion.

The theme of Fortnite Chapter 2 was a fresh planet and a new beginning. While maintaining its core gameplay, the chapter provided a completely new Apollo map and additional features such as a new progression system, cars, and NPCs that improved the quality of life in the famous online game. Fortnite Chapter 2 was mainly defined by its crossovers, with considerably more partnerships than the prior chapter. Characters from iconic films, shows, and other video games made cameo appearances, allowing players to purchase or unlock cosmetics to transform into their favourite pop culture stars. Fortnite’s recent Naruto crossover is a perfect example, with character skins and settings from the popular anime series added to Epic’s battle royale game.

Epic Games has released a new teaser for Fortnite Chapter 3 that reveals a little more information about the game without giving too much away. Epic Games tweeted an image of the original advertising image for Chapter 2’s map on its official Twitter page, along with a comment implying that Chapter 3’s new map may be a new universe. Some users believe the Fortnite Chapter 3 map has been leaked, even though no additional information is provided except “an unknown planet with new secrets to reveal.”

Epic Games’ mysterious tweet sparked interest among its followers, with many others racing to the post to provide their predictions for the following season. One user zoomed in and screenshotted different elements concealed within the original post’s linked graphic, highlighting the area in the top right corner, which appears to be home to some power plant. Another fan shared screenshots from one of their previous Twitter threads, speculating that the game will eventually disclose a universe made up of six islands guarded by Fortnite’s Imagined Order.

Chapter 3 of Fortnite is due to begin on December 5, and Epic Games has been tight-lipped on the game’s future. While leaks come and go, players won’t have to wait long to get their hands on the brand new map. On December 4, Chapter 2 will come to a close with a spectacular finale, allowing fans to learn what improvements are in store for the popular battle royale game.

Fortnite is a game that can be played on any platform.