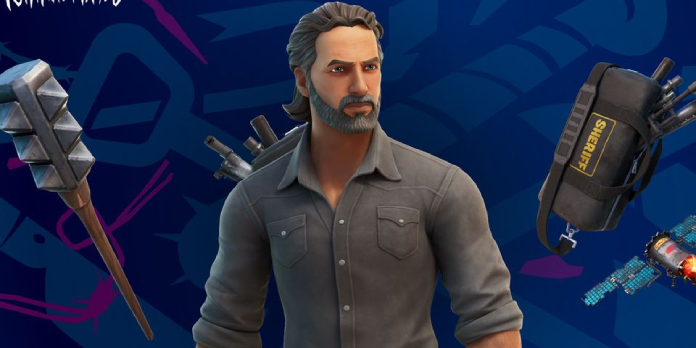 Rick Grimes of The Walking Dead joins Darryl and Michonne as a Fortnite playable skin, just in time for Epic’s Fortnitemares Halloween event.

As part of this month’s Fortnitemares Halloween event, Fortnite will get yet another special guest player skin: Sheriff Rick Grimes from The Walking Dead. TWD heroes Darryl Dixon and Michonne, who were previously added to Fortnite as playable characters to commemorate the ongoing hit AMC television series last December, will be featured alongside Grimes.

Fortnite has become one of gaming’s most popular crossover experiences in recent years, with playable skins of popular characters from a wide range of video games, comics, movies, and television shows appearing in Epic’s massively popular battle royale shooter. Both real-life celebrities, Travis Scott and Ariana Grande, have joined in the fun by hosting visually stunning virtual concerts in Fortnite. Meanwhile, back in July, rumors surfaced that another member of The Walking Dead would be joining Darryl and Michonne in Fortnite, and this has now been confirmed just in time for Halloween.

Also See:  How to: Fix the “disk Structure Is Corrupted and Unreadable” Error in Windows

Fortnite’s official Twitter account just confirmed that The Walking Dead’s Rick Grimes is now available as a playable character skin for 1500 V-Bucks, as reported by PCGamesN. A bundle of Walking Dead-themed gear, including a walker club, backpack, and even a fiery crashing satellite glider – as well as an alternate, jacket-wearing Rick Grimes skin – is available for 1900 V-Bucks. Also returning are the previously available Darryl Dixon and Michonne character and gear packs, which can be purchased separately or as part of a discounted bundle for 2500 V-Bucks. The new Rick Grimes content, on the other hand, will have to be purchased separately.

He’s shown us what it takes to go through all walks of life.. and afterlife.

As previously stated, this new Walking Dead character skin coincides with Fortnite’s month-long Fortnitemares event, which features new monster-themed skins and events throughout October. The new Frankenstein’s Monster, Curdle Scream Leader, and Mummy skins, as well as the return of Fortnite’s Shortnitemares film festival, are among the highlights of this year’s spooky celebrations. Season 8’s attack of The Cubes, which began immediately after Season 7’s alien invasion, will be continued in Fornitemares 2021.

Rick Grimes hasn’t appeared on The Walking Dead since Andrew Lincoln left in 2018. However, he’s still a popular and memorable character among fans of both the show and the award-winning Image Comics series it’s based on, making him a great addition to Fortnite alongside his fellow survivors Darryl and Michonne. Starting today, players can play as Rick in the creepy battle royale, with more gruesome content likely to follow as the month-long Fortnitemares event continues.

This Is How You Can Fix Hdr Games Issues on Windows...