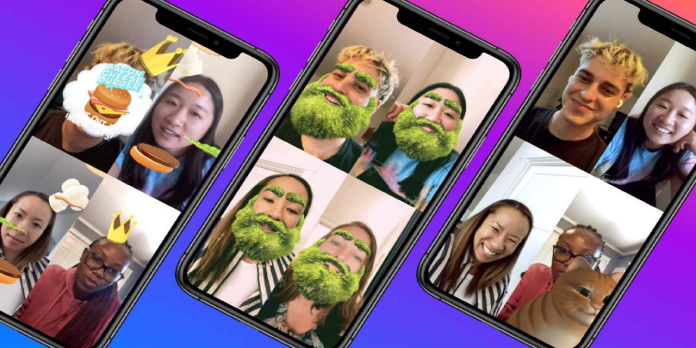 Facebook has announced that any participant in a Messenger Room or a Messenger video chat can now apply augmented reality effects. These AR experiences are dubbed “Group Effects” by the firm, and they will become more comprehensive in the coming months as Facebook opens access to the Spark AR Multipeer API. More developers and producers will be able to create their Group Effects as a result of this.

Augmented reality effects are familiar to almost any social media user; they’re the entertaining filters that, for example, allow Snapchat users to change their appearance, wear virtual glasses, and so on. Group Effects on Facebook do the same thing, adding a fun aspect to the video group chat experience.

Also See:  How to Use Dell Migrate to Move Files From One Pc to Another

The fundamental change here is that everyone in a Messenger room or video conference can utilize AR filters simultaneously. According to Facebook, Messenger users now have access to more than 70 Group Effects, ranging from a cat that can “walk” through each user’s screen to a game in which everyone in the room or on the video conference competes to create the most OK AR burger.

Group Effects may be accessed by touching the smiley face on a call and then selecting Group Effects. In general, augmented reality filters and experiences have been limited to a single user. Group Effects enhances the experience by allowing two or more people in separate locations to play the same AR game or offer their AR filters during a call.

Aside from that, developers will be able to create one-of-a-kind AR experiences for others to enjoy. According to Facebook, access to the Spark AR Multipeer API will be expanded by the end of October.