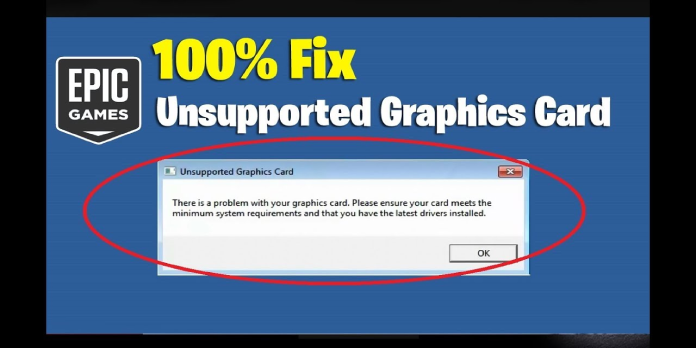 The Epic Games launcher is necessary to launch and play popular Epic Games games like Fortnite. However, opening the launcher results in an error message about an unsupported graphics card for some users.

Other times, individuals cannot access their accounts due to a variety of factors.

Epic Games have acknowledged the problem with the Windows 7 system. It can, however, happen on newer versions of Microsoft OS, such as Windows 10. Corrupted game files and incompatibility issues are among the causes of the error.

It’s unpleasant when trying to access your Epic Games account, whether you’re getting a graphics card problem or a process error.

This is the article you need if you’re having trouble with this error. We’ve outlined a few troubleshooting procedures in this article to assist you in resolving the Epic Games launch unsupported graphics card error.

What is the solution to the Epic Games launch unsupported graphics card error?

Many customers have fixed the issue by removing their dedicated GPU and then opening the Epic Games launcher. When you re-enable the dedicated GPU, you’ll get an unsupported graphics card error.

If you’re experiencing the same issue, it’s possible that it’s due to a driver issue with your graphics card. Try updating your GPU’s Nvidia driver to the most recent version to fix the problem. While you can update the GPU and display drivers manually, driver updater applications such as DriverFix can help you automate the process.

2. Use OpenGL to force the launcher to open

The launcher will be forced to open with compatibility settings due to this patch. Check if the unsupported graphics card error has been fixed by launching the launcher.

3. Start your computer in Clean Boot mode to check for third-party program conflicts

This can help you figure out whether you have any third-party software on your system that is generating a conflict and causing the unsupported graphics card issue.

To troubleshoot, open the Epic Games launcher and see whether the error still occurs. If not, you may have an issue with a third-party app that is causing the error. This problem has been linked to apps like ActivInspire, Duet, and other screen-sharing and display-related apps.

Third-party software should be uninstalled

After you’ve removed the software, restart your computer to see if anything has changed. Programs that operate with your display are the most common possibilities for this problem.

Relaunch Epic Games Launcher after the repair is complete to see if the error has been addressed.

Restart your computer after installing the update. Relaunch Epic Games Launcher after the restart to see if the issue unsupported graphics card has been resolved.

If you’ve installed the Windows Platform update, make sure you delete the -openGL from the launcher shortcut target line.

Go to the Xbox status page to see what’s going on. Expand any services that have alerts, go down to Notifications, and sign in to receive a message when the service is back up and running.

The emergence of the 0x87DD0017 issue can be caused by a network irregularity, as it turns out. Several afflicted users have reported that the problem was caused by an IP/TCP issue in their situation, which they were able to resolve by forcing a network reboot or reset (in more serious cases).

If you keep seeing this, turn off your Xbox by pressing and holding the power button for 10 seconds. Then turn it back on and repeat the action.” So I’ve tried it several times, double-checked my network and Xbox Live connections, and rebooted my computer.

Also See:  How to: Open PSD Files in Windows 10

5. Starting epic games launcher says that i have an unsupported

You Can Disable See Records in Power Bi in 2 Easy...

How Do I Block Unwanted Calls On My iPhone?