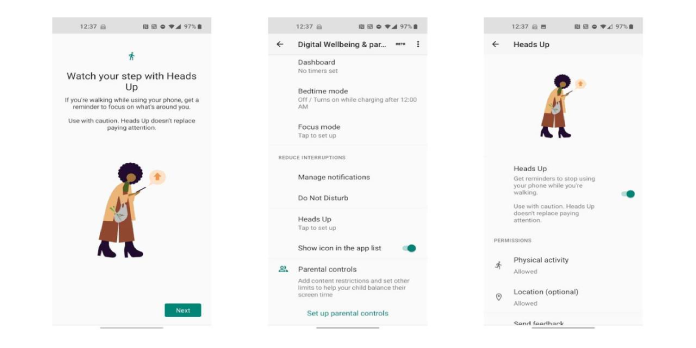 We sleep in a society where it’s not unusual to ascertain people’s faces glued to their smartphone screens. While this will be a social issue most of the time, it is often a security hazard when people do so while walking. A couple of months back, Google introduced a straightforward thanks to reminding people to stay their heads up once while traveling. That Heads Up feature is seemingly bent getting down to beginning to roll out to other phones that aren’t Pixel phones, provided you’ve got Digital Wellbeing installed.

“Heads Up” doesn’t exactly use sophisticated machine learning or algorithms. In a nutshell, it uses Android’s physical activity detection paired with location data to work out if you’re traveling at a substantial distance. Consequently, you’ll get to grant this feature those two permissions for it to figure.

The idea is that you get a reminder to prevent using your phone while walking. Ironically, this feature is found under Digital Wellbeing’s “Reduce Interruptions” section, despite actually interrupting you with notifications. That said, it’s going to be a critical interruption that would save your life.

The feature was first introduced in Pixels phones and has been exclusive to Google’s phones since its launch. However, XDA now reports that Android phones from other manufacturers have started getting the feature, including the ASUS ZenFone 8 and, therefore, the OnePlus Nord N200 5G. The settings for the part are simple, allowing users to show off reminders or grant or revoke permissions.

Of course, Heads Up requires Google‘s Digital Wellbeing app to be installed first, and not all phones are compatible with it. Users shouldn’t be hooked into such reminders anyway for their safety, and therefore the feature itself cautions that it isn’t a replacement for listening to where you’re going.