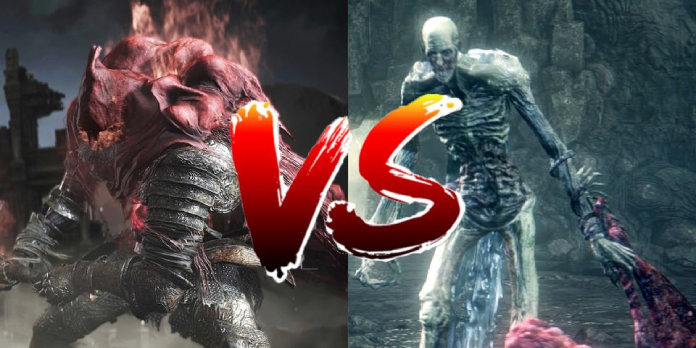 To see who is the ultimate final FromSoftware DLC boss, one Dark Souls 3 user utilised mods to pit Slave Knight Gael against the Orphan of Kos.

A new mod for Dark Souls 3 sets the game’s final DLC boss against the final DLC boss from Bloodborne, another FromSoftware game. Over the past decade, FromSoftware has built a reputation for hard bosses. It appears that tradition will continue with the upcoming Elden Ring, which fans have been anticipating for quite sometime after its original presentation at E3 2019. Many of the hallmarks fans have come to expect from the new title were unveiled in a more in-depth teaser presented during Summer Games Fest earlier this year.

Another distinct feature of FromSoftware games is the committed modding community, which continues to provide games dating back to the original Dark Souls. Like those from other communities, the mods span a wide range of tweaks and additions, including one that adds sports to Dark Souls 3. One fan was recently able to answer a unique question thanks to the work of the modding community: who is the ultimate last DLC boss?

Garden of Eyes, a YouTube channel dedicated to pitting Bloodborne bosses against one another, launched their channel towards the end of 2020. Since then, their objective has grown to include additional FromSoftware games, with their most recent battle pitting Dark Souls 3’s Slave Knight Gael from the “The Ringed City” DLC against Bloodborne’s Orphan of Kos from “The Old Hunters.” The movie features an improved version of Orphan of Kos from a mod called “Call of the Abyss,” and three bouts between the two titans. Each encounter takes place in a different Dark Souls 3 boss arena. Despite winning the first round, the Orphan of Kos loses the next two rounds against Slave Knight Gael, resulting in a neck-and-neck battle in the finals.

Garden of Eyes does not only include boss versus. Boss battles. NPCs or famously difficult mini-bosses are sometimes pitted against the actual bosses and one another in battles. FromSoftware mods, such as a Bloodborne first-person camera mod, are also featured on the channel. It only shows how much innovation can be found in the gaming business, even among the players of a game as difficult as Dark Souls.

Watching Dark Souls and Bloodborne bosses mercilessly beat each other instead of a defenceless player has an undeniable appeal. It stems from a common issue that every player of From Software’s games has experienced at some point, especially while playing these games for the first time. It also helps that the bosses are intimidating individuals who make for exciting opponents when pitted against one another. Elden Ring will almost certainly include more famous bosses that will make seasoned players feel perfectly at home and introduce a new generation of gamers to the FromSoftware universe. Until then, gamers can keep fighting what came before them and, if things become too rough, watch Gael and the Orphan slap each other around for a change of pace.

Aiming Issues in Call of Duty: Vanguard Can Be Solved by...