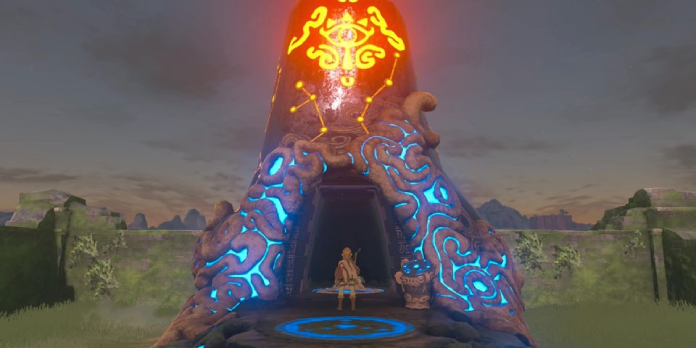 Players who try to skip the shrine that grants Link the Stasis rune will receive a secret message in The Legend of Zelda: Breath of the Wild.

A Legend of Zelda: Breath of the Wild player recently discovered that the game was prepared for his attempt to take a shortcut through one of the game’s shrines. The user posted a video of Link avoiding the puzzle on Reddit, only to be greeted with an unexpected message indicating that he still has work to do.

Breath of the Wild bestows upon Link various abilities, allowing the player to experience the game in a way that others may not. Instead of forcing players to follow a set path, the unique gameplay allows them to complete the shrines in their unique way, ensuring that no two experiences are the same. Cryonis, Magnesis, Remote Bomb, and Stasis are among Link’s abilities available throughout the game’s early shrines. The player can collect these runes in any order they want and use their abilities in unpredictable and sometimes hilarious ways. The Stasis rune can be found in the Owa Daim Shrine. It allows Link to completely stop an object or enemy for a short period while causing damage that can be used to launch a piece of an environmental puzzle or attack his opponents.

Also See:  Ghost of Tsushima Director’s Cut on PS5 is a sight to behold

On the Breath of the Wild subreddit, Reddit user CrazyKaden125 posted a video that appears to show them in Owa Daim, timing a jump that combines shield-boarding and a remote explosion so Link can soar straight to the finish line. Many gamers who are interested in speed-running choose Breath of the Wild because of maneuvers like this. CrazyKaden125 was not given a spirit orb as they had hoped but instead received the following message: “Extract the Rune from the Guidance Stone, and then return.” It was important to the Breath of the Wild developers that the player exit the level with the rune after completing Owa Daim Shrine.

I was trying to cheese the stasis shrine but… from Breath_of_the_Wild

Of course, using a Breath of the Wild exploit may not have been CrazyKaden125’s intention. It’s safe to assume that they wanted to “cheese” the shrine first to see if they could, then repeat the process more traditionally to claim the power. Nevertheless, Nintendo‘s clever message, particularly how it anticipates the resourcefulness and imagination of its players, wowed and surprised Redditors in the comments. The mechanics have a playful feel, which encourages experimentation and embraces the fun possibilities that certain bugs provide.

Since the massive success of the first Breath of the Wild in 2017, the sequel has become a much-anticipated title, with a teaser trailer inspiring a fan to make their Breath of the Wild 2. However, despite showing footage at the most recent E3, the teaser did not specify when players could expect to purchase a copy. Until then, gamers can continue exploring the massive first game or travel back in time with The Legend of Zelda: Skyward Sword HD, both of which are available on the Nintendo Switch.