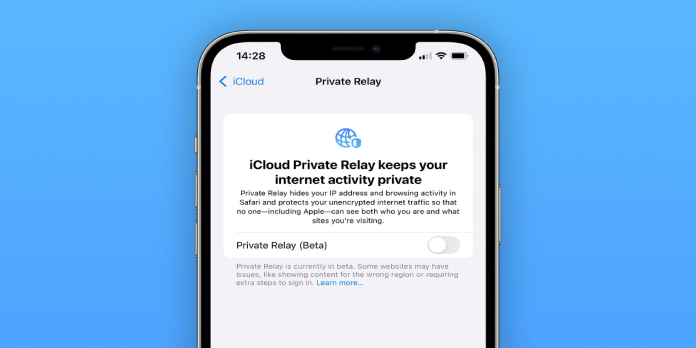 T-Mobile, which is spearheading the charge in both the UK and the US, is blocking Private Relay because it interferes with its own online content safety systems. Private Relay, Apple’s VPN-like service that prevents internet service providers from spying on users’ browsing activities and IP addresses, appears to be blocked by some carriers. To be clear up front, Private Relay is not a VPN service, even though several of its basic functions sound like they are. A Private Relay encrypts DNS (domain name server) data and disables IP address monitoring, so an outside party can’t keep track of which websites users visit. A virtual private network, or VPN, is a secure network.

Private Relay sounds like a godsend in a world where digital breadcrumbs left by internet users are highly sought after — and routinely misused — for targeted advertising. Because each party only has access to one of two elements — the IP address or the website name viewed by a user — neither Apple nor a service provider can create a comprehensive user profile. Although it does not go to the same lengths as VPNs, this decoupling retains some level of privacy.

Some carriers, however, appear to be dissatisfied with the service. Customers on T-Mobile and AT&T have reported that they cannot use Private Relay. T-Mobile says in a statement to 9to5Mac that users who have enabled content filtering and blocking technologies like T-Mobile Web Guard won’t be able to use Private Relay. According to an internal letter obtained by The T-Mo Report, T-Home Mobile’s Office Internet users may also be affected, as it includes some built-in website filtering measures. When impacted customers try to enable Private Relay, a warning message appears that says, “Your cellular plan does not support iCloud Private Relay.” Private Relay was released with iOS and required an iCloud+ subscription, starting at $0.99 per month.

Here’s what it shows when you click the “Learn More” pic.twitter.com/Xb9QyF67Am

Is it a valid concern or a competitive rage?

“Furthermore, the private relay will impede others’ capacity to innovate and compete in downstream digital markets, as well as operators’ ability to manage telecommunication networks efficiently,” the carriers write in a joint letter obtained by The Telegraph. The telecommunications companies are pushing for Apple to be labeled a “digital gatekeeper.” As a result, the EU’s stringent internet privacy and antitrust regulations may prevent Apple from delivering the Private Relay services, as it threatens “digital sovereignty.” Furthermore, the carriers claim that Apple’s service inhibits them from developing measures to safeguard users from hazardous internet content.