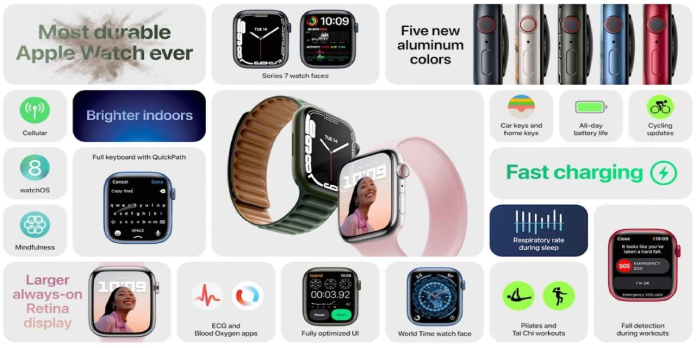 Apple’s newest wearable may have come as a disappointment for Apple fans last week. Apart from the larger screen that also brought bigger cases, the Apple Watch Series 7 was so different from how leaks have painted it that it became a cautionary tale about putting the excessive stock on leaks. Of course, the newest Apple Watch will still be considered among the simplest within the smartwatch market. It has one curious feature that’s completely inaccessible by anyone except Apple.

Except for the earliest smartwatches that relied on pogo pins to make a physical connection, most smartwatches use wireless technologies for charging and data transfer. The latter usually involves Bluetooth when communicating with a smartphone, but other technologies are also used to transfer files from the smartwatch to something sort of a computer. That sometimes happens when the smartwatch is docked, and therefore the dock itself is connected to a computer via a cable.

It seems that Apple has given the new Apple Watch a souped-up version of the latter that only the corporate or its authorized partners could be ready to use. Consistent with an FCC filing spotted by MacRumors, the Apple Watch Series 7 features a hardware module that’s capable of wireless data transfer at an astounding speed of 60.5GHz. The catch is that this module is merely activated when placed on a special dock.

That dock, with model number A2687, is some things that have never been seen before. It’s presumed to be an indoor tool used only by Apple employees. It might have been a stimulating feature to possess that might drastically hamper data transfer times, but it isn’t meant to be.

This 60.5GHz wireless data transfer mode could be Apple’s wireless version of its infamous Apple Watch diagnostic port. It remains to be seen, however, if that’s the case and if that port still exists, something we’ll anticipate discovering when someone like iFixit tears the Apple Watch Series 7 down.