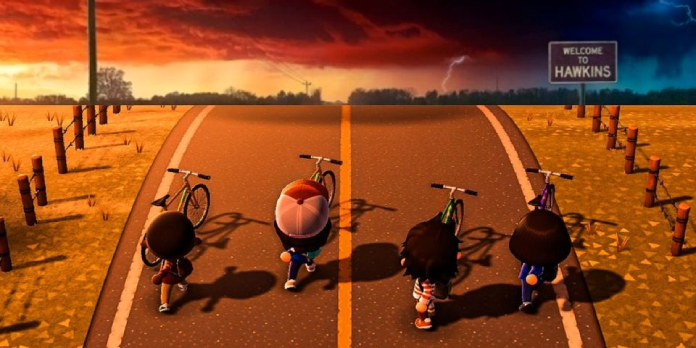 A group of Animal Crossing players have recreated Stranger Things’ most famous scenes ahead of the fourth season’s premiere.

With an in-game build that pays homage to the hit Netflix show, an Animal Crossing: New Horizons player and their friends have fully prepared for the upcoming Stranger Things season four. Since the game’s release in 2020, Animal Crossing players have been recreating famous moments from TV shows, movies, and other games, but this Stranger Things game crossover could be the most impressive yet.

Artists and creators have been using Animal Crossing: New Horizons’ available design tools to bring even their wildest build ideas to life, creating unique and inspirational island paradises to share with the game’s community. Animal Crossing has a variety of custom tools that can be used to turn players’ pixel designs into pathways, clothing, and other items, in addition to in-game decorative items. Fans of the Nintendo classic have been reimagining and building everything from The Legend of Zelda game maps to Studio Ghibli movie moments in Animal Crossing, thanks to the various creative options available.

Sylver Acnh, a Redditor and Animal Crossing fan, has shared his ideal Stranger Things build ahead of the fourth season’s release. The user has recreated one of the most famous Stranger Things scenes, in which four of the young protagonists sit atop their bikes, staring out into the open road. The road, distant trees, and even the barbed-wire fence have all been accurately captured in the ACNH design, topped off by Sylver Acnh and their friends posing in front of their bicycles, dressed as Lucas, Dustin, Mike, and Will. With a bit of editing magic, the foreboding sky and impending peril ahead of the heroes are made even better.

With the release date for Stranger Things season four still unknown, fans of the Animal Crossing Netflix design have plenty of time to recreate it on their island. The Barbed-Wire Fence, a flattened area to build, and a variety of trees planted in the distance are all required. Custom pathways, which can be searched through the Design App, can mimic the road design. Players must also invite friends and dress them up in 1980s-inspired outfits, complete with Dustin’s hat and four bicycles. The finished Hawkins look is completed with weeds and a utility pole.

This isn’t the first time Animal Crossing has reimagined a Netflix series. Squid Game, a streaming sensation that debuted in September 2021, is one of the most popular new releases to be remade in the Nintendo title, with fans already designing their in-game costumes based on the game’s characters. Players have also recreating classic moments from the show, with one streamer recently converting the first episode of Squid Game to Animal Crossing.