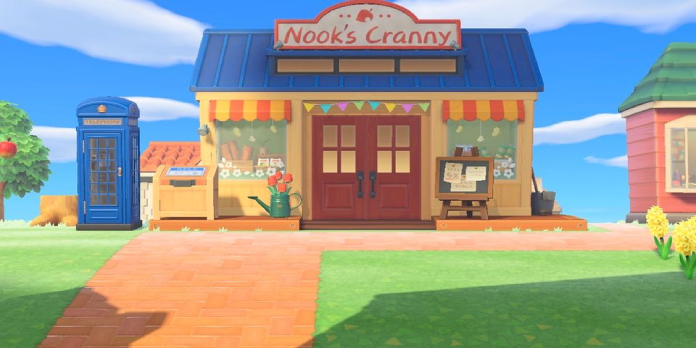 A clever Animal Crossing: New Horizons fan shared their design of a Nook’s Cranny-inspired playhouse for their son to enjoy.

One Animal Crossing fan revealed their work, which consisted of transforming their child’s real-life playhouse into a replica of Nook’s Cranny. The outer décor of an otherwise ordinary playhouse is a perfect reenactment for every child who wants to pretend to be Timmy or Tommy Nook. It’s only the latest in a long series of Animal Crossing fan productions attempting to bring the game to life.

Animal Crossing: New Horizons has been out for more than a year, and it’s getting a huge upgrade in early November. The update will include several new features, including visits to exotic islands with Kapp’n, the long-awaited arrival of Brewster, and recipes. Though fans are delighted about the major upgrades, the next Animal Crossing update is slated to be the game’s last free DLC. Many gamers have returned to their islands after long hiatuses to prepare for the new features.

Also See:  Apple's Find My App Will Soon Warn You About Stalkers

KaraoChris, an Animal Crossing fan, created a real-life Nook’s Cranny for their son and posted it on Reddit. KaraoChris appears to have modified an existing playhouse by adding a “Nook’s Cranny” sign, the yellow and red overhang, and changing the entrance to match the store’s vivid crimson. In addition, the mailbox in front looks to have been altered to reflect the dropbox where Animal Crossing players can deposit valuable things in exchange for quick bells. It’s a magnificent design, and KaraoChris put a lot of love and attention into it for their son.

Turned my son’s playhouse into Nook’s Cranny for Halloween. from AnimalCrossing

KaraoChris stated in the comments that this Animal Crossing playhouse matches the family’s forthcoming Halloween costumes. The two kids look to be dressing up as Timmy and Tommy, while KaraoChris will be dressed as Tom Nook. Of course, Tom Nook is the head of the player’s island resident services, even though many Animal Crossing players regard him as a monster. Although Tom isn’t necessarily a bad guy, his loans can be a pain for players just starting and attempting to build up their island on a shoestring budget.

Also See:  Finally, a PlayStation Discord connection appears to be in the horizon

Despite their perceived villainy, KaraoChris and their children’s relationship with the Nooks and their business demonstrates Animal Crossing’s power and influence. Animal Crossing: New Horizons is a terrific game that the whole family can enjoy. Gamers can now share their hobbies and passions with the next generation. Hopefully, KaraoChris will update the family’s Animal Crossing-themed Halloween outfits and show off Timmy and Tommy in their shop shortly.

The free update and Happy Home Paradise DLC for Animal Crossing: New Horizons will be available on November 5 for Nintendo Switch owners.