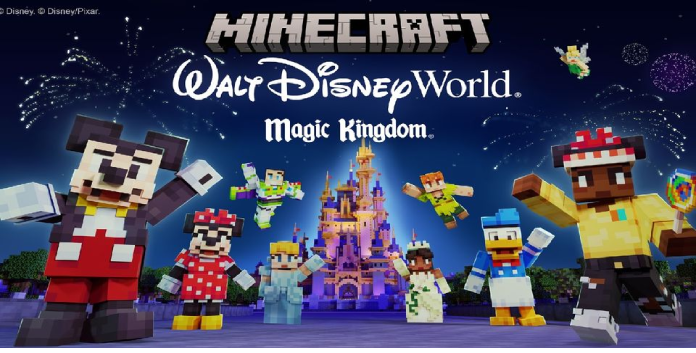 Minecraft and Disney have teamed up to create a detailed reproduction of the Magic Kingdom park, complete with attractions and Disney characters.

Minecraft is a vast playground that brings together all kinds of popular culture, and now it’s announcing a major partnership with Disney World. Minecraft provides an escape for people who need to go to unbelievable countries like Hogwarts or real destinations they can’t get to right now.

Since the game’s inception, players have been using Minecraft’s deceptively simple block-placing functionality to create some genuinely spectacular things. There’s no limit to what Minecraft users may create, whether it’s static constructions or dynamic pieces of art that move and can be interacted with using Redstone. Not to mention that Mojang Studios is constantly adding new landscapes, monsters, and materials to the game’s the nearly limitless palette. Minecraft creations mix imagination and real-world influence, with some of the most amazing designs being recreations of real-world sites. Through brand collaborations, some of these real-world creations even come from official sources.

Also See:  The Halo Infinite Campaign Trailer Fight of the Boss Against Escharum

Minecraft‘s latest partnership is particularly magical, as it includes a full-size map of Disney’s Magic Kingdom Park in Florida. The Minecraft x Walt Disney World Magic Kingdom Adventure DLC celebrates the Magic Kingdom’s 50th anniversary by allowing players to explore a park’s reproduction, complete with rideable attractions and twenty-nine NPCs dressed as Disney characters. According to the press announcement for the Minecraft DLC, it aims to be as accurate as possible, so fans of the Magic Kingdom should be able to see everything they know and love from the entire park reproduced in Minecraft. As an official Disney collaboration, this DLC could give some of the year’s top mods a run for their money.

This isn’t the first time Minecraft has teamed up with a well-known company to depict well-known locations and personalities in the game. Mojang Studios launched a Sonic the Hedgehog-themed DLC pack, complete with skins, recreations of legendary areas, and rings to collect, exactly like in the Sonic games. A DLC based on the popular programme Adventure Time was released a few years ago. It also works the opposite way, with Steve, the main skin in Minecraft, making his debut as a character in Super Smash Bros. Ultimate. However, because this one is an entire theme park, it’s a little bigger.

Minecraft is still going strong, allowing gamers to digitally visit a beloved amusement park that many cannot visit in person. While this DLC isn’t as outlandish as other works, such as full-fledged video games like Super Mario Land, it’s still quite stunning.