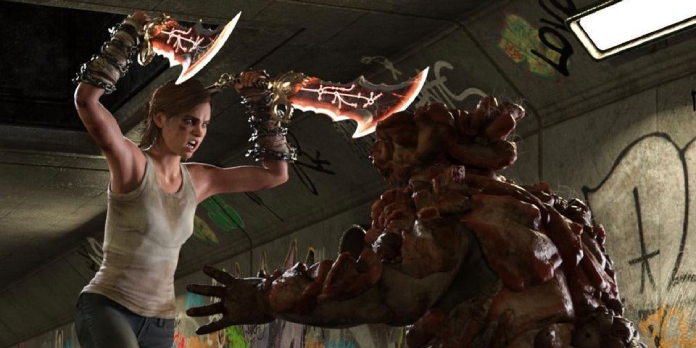 A fan of The Last of Us and God of War imagined what it would be like if Kratos took the place of Joel as Ellie’s tough companion.

This new mash-up of God of War and The Last of Us is certain to delight fans of crossover art. The inventive images are only a handful of the many fan-made artworks that use characters from these legendary games. For example, one God of War fan recently posted an ancient Greece mock-up of Kratos and Atreus.

The Last of Us and God of War are two crown jewels of Sony’s huge library of exclusives for many gamers, sitting alongside other popular properties like Horizon: Zero Dawn and Marvel’s Spider-Man. While the PlayStation 4’s game library was previously chastised for being too focused on cinematic game-movie hybrids, it has expanded to incorporate more sophisticated and diverse gameplay systems. In addition, Sony’s readiness to embrace bizarre and esoteric titles, such as 2019’s Death Stranding, demonstrates the company’s ability to embrace unusual and esoteric titles. Still, bombastic, well-crafted storytelling appears to remain at the top of Sony’s goals. Nowhere is this more evident than in the 2018 God of War soft reboot, which saw Kratos leave Greece behind to embark on a contemplative adventure that drew inspiration from The Last of Us.

A couple of Reddit posts recently drew attention to the similarities between the two best-selling games. DoomsdayDaveVP, a Reddit member, initially submitted a sequence of photographs depicting Ellie from The Last of Us Part II wielding Kratos’ legendary Blades of Chaos and dispatching a Clicker. In a subsequent post, DoomsdayDaveVP elaborated on this concept with visuals of Kratos taking Joel’s role as Ellie’s guardian and tutor. Kratos fights a Clicker with nothing but his bare fists in the second batch of images, which is fitting.

Something about this mash-up feels eerily apt, given that The Last of Us was an obvious inspiration for 2018’s remake of God of War. Compared to other video games, both of these titles take a much more cinematic approach to storytelling, and a major The Last of Us TV programme is on the way. In addition, characters like Ellie and Kratos have become undeniable gaming icons due to both games’ concentration on presenting heavy-hitting narratives, and seeing them side-by-side is surely a delight.

It’s simple to imagine a different take on this mash-up notion. Fans may get a chance to see Joel and Atreus fighting a horde of Norse zombies in the future. In any case, when God of War arrives on PC early next year, these pieces of The Last of Us fan art are sure to inspire ambitious modders.

Fortnite’s Chinese Version Will Shut Down In November