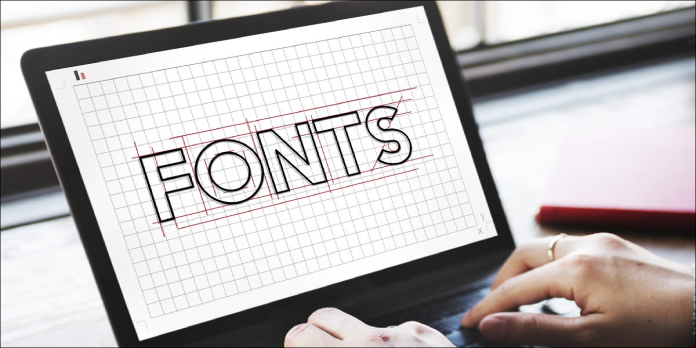 Here we can see, “A Comprehensive Look at the New Microsoft (Vista) Fonts”

After all, as they say, it’s the little things that count. With every new edition of Windows or Office, Microsoft Corporation appears to prefer to include several minor extras that make it a sweeter deal. Windows Vista and Office 2007 are no exception: not only is Microsoft attempting to make up for a lost time (almost six years for Vista and four for Office), but it is succeeding admirably! We’ve only heard good things about the Office team, and we think the Microsoft Typography team is at least on the level with them, if not better. We’re confident you’ll agree after reading this review.

The following are examples of 10 new Vista/Office 2007 fonts, all photographed at 11 points in Office 2007. Even though Microsoft has released a slew of additional ones, these are the largely Latin-based scripts that come standard with every installation, regardless of region. Notice how the bulk of the fonts are sans-serif (in contrast to the purportedly more legible serif scripts for lengthier articles) and how many begin with the letter C for some inexplicably odd reason! (Not that we dislike the letter C, but again, why?)

The experts at the Microsoft Typography Labs have optimized all of these fonts for screen readability. For the first time in history, thanks to powerful anti-aliasing technologies and OpenType libraries, it is now feasible to have fonts that look amazing on the screen and look just as well on paper.

Click on each font to get a larger screen capture with a wider selection of letters, numbers, and characters.

This is Calibri. Calibri is the new default font for Office 2007, poised to take Times New Roman out of its traditional alpha-male location. For the first time, MS Word users will have a sas-serif font by default. It looks professional, but not at the cost of aesthetics.

Cambria is a really nice new font that ships with Office 2007, and is primarily meant for titles, though it works great for other stuff too. It’s not a true serif font, but then again, it certainly isn’t sas-serif, but an interesting mix. Extremely well-formed characters with excellent spacing lend themselves to giving Cambria a very unique feel, and making it an ideal font to kick-start Office 12 with.

Candara is a new “exquisite” font, for lack of a better word. It’s nice, flowing, shapely design doesn’t leave much to be desired, and adds a lot to any logo (think taglines!). It’s well-spaced and embraces a new “thin-style” typography.

Consolas is the new Lucida Console, following the “Vista-trend” it’s a sans-serif font with the same rounded appeal, but nevertheless retains the traditional “code” feel, with monospaced characters and a “boxy” look.

Constantia is slightly reminiscent of the old-fashioned typefaces, but with a new twist that makes it perfect for essays and articles (pay attention to the ‘y,’ ‘j,’ and the ‘f’). Just like Cambria, it’s a mix between sans-serif and serif, and makes for an excellent display and a fresh look.

Corbel is also a new font that comes with Vista. It’s thin, spidery letters make a nice contrast on a wordy page. It’s yet another sans-serif font (also “thin-style”), and well-suited for both logo work and articles.

Nyala is a nice font, especially for art designs. It feels a bit like Candara, but it’s different enough to make it special. Great for logos and ID kits, Nyala preserves the true art of calligraphy and mixes it with technology of today. With a smaller pixel-size it may not be the ideal “essay font” but it does a great job nevertheless.

Segoe UI is a much-controversial and very popular new font first introduced in Windows Vista builds, and then made its way to Office 2007. Sleek and well-formed, Segoe UI is the new default for captions and titles in Vista, hence the slightly larger pixel-size, and the distancing between letters; as such it’s ill-suited for anything else (e.g. essays).

Along with the Segoe Family comes Segoe Print, a very nice font with easy-to-read informal characters. While being well-formed, it retains a “friendly” feel, and is excellent for certain dialogs in programs – and the notepad sidebar gadget!

Segoe Script is another Segoe-Family Member, and it has rather amazing connecting algorithms that decide the shape of each letter per its location – but just like cursive handwriting, it’s not the easiest to read.

1. What typeface is used in Windows Vista?

Segoe UI will be the font used throughout the Windows Vista user interface and the Office user interface. Calibri (a sans serif typeface) is recommended for headings in Office documents, Candara (a humanist sans font) for sans body text, and Cambria for serifed text.

2. What is the name of the new Microsoft typeface?

Tenorite is a geometric font with wide punctuation and circular forms. To put it bluntly, it is larger than Calibri. Bierstadt, named for a fourteener in Colorado, uses a combination of thin and heavy strokes with no fussy flourishes.

3. What typeface has the appearance of archaic computer text?

Segoe, the Microsoft Windows typeface, is a riff (or possibly rip) on Frutiger Next, the parent font introduced in 1968. In 1931, Times New Roman was created. Digi Grotesk was created in the 1960s, but it appears to be based on a typeface named Neuzeit Book, created in 1928.

How to: Fix Can’t Copy Files to USB Drive Because It’s...